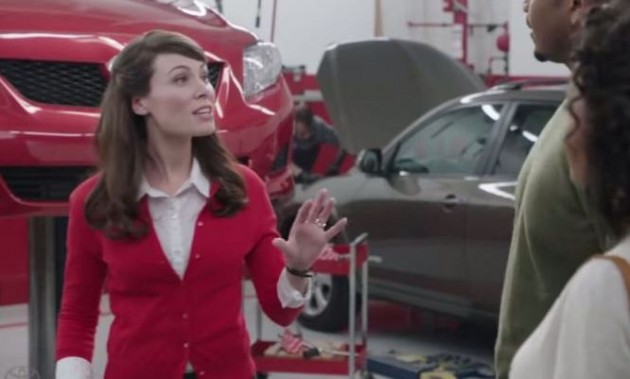 Ever wonder what the world would be like without Toyota Jan? In three new commercials for Toyota Services Centers, we get a glimpse of that…and boy are we glad she’s around to save the day!

Toyota has released five new commercials starring the lovable Jan (two of which are for the Toyota Time Sales event, which you can watch here). Three of them are advertisements for Toyota Service Centers. You’ve probably already seen them making the rounds on prime-time, but if you haven’t—or you want to watch them on repeat like we do—check them out below.

The first 30-second video is about an electrician who assures a couple that his rewiring job using “just some stuff” will work fine. On cue, the ceiling fan begins emitting bolts of electricity that tear the room apart. As the sparks and smoke rise, Toyota Jan steps in and saves the day (good thing she’s not pregnant anymore).

She assures the couple that Toyota Service Center technicians only use genuine Toyota parts, not knockoffs that won’t work properly.

The next commercial, about a house painter, is laid out similarly. Once a mother discovers her dining room has been painted over COMPLETELY in Smurf-blue pigment by an incompetent worker, Jan steps in and guides the woman to a Toyota Service Center.

Distracting the woman from her ruined home, Jan proceeds to explain how trained technicians spent thousands of hours mastering Toyota models (as in the vehicle, not Jan).

The third spot is a bit different. Instead of Toyota Jan meeting a homeowner who’s in the middle of a disaster, the homeowner actually walks up to Jan’s desk in the dealership showroom. She explains to the man that Toyota Service Centers are important because no one would use an unskilled carpenter for a woodworking job (it’s a loose parallel, but go with it).

The man proceeds to have a daydream (or is it a flashback?) of being bombarded in his kitchen with nails being launched through the air.

So why is this commercial’s setup different? Perhaps it could mean something…Our theory is that the man actually died in the carpentry accident and is in the afterlife talking with Jan! What a twist ending!