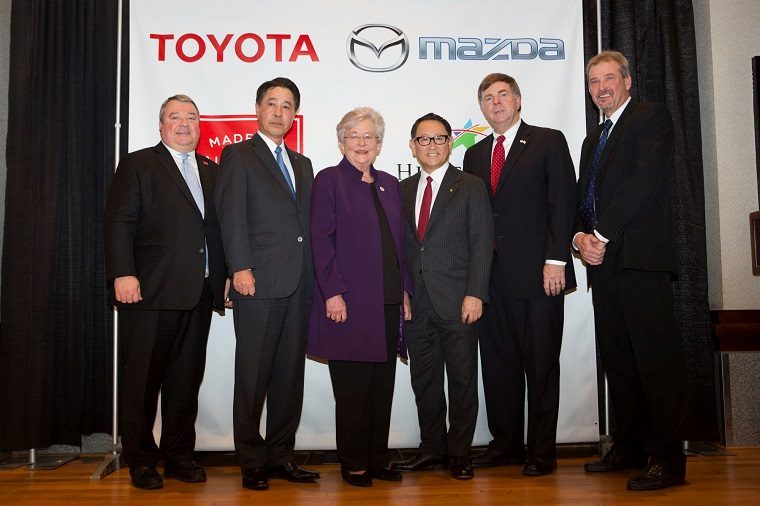 Toyota and Mazda, along with Alabama Governor Kay Ivey and Huntsville Mayor Tommy Battle, announced that the two automakers had chosen Huntsville as the site of the new auto manufacturing plant it would build together.

This follows last year’s announcement that Toyota and Mazda had entered a new business and capital alliance. The two Japanese companies will invest $1.6 billion in the site, located approximately 14 miles from Toyota’s existing Alabama plant. The plant is expected to create up to 4,000 jobs and to be capable of putting together 300,000 vehicles per year when it begins production in 2021.

“The partnership between Mazda and Toyota will expand innovative automotive manufacturing in Alabama,” Governor Ivey said. “Their decision to locate this new facility in Huntsville is a testament to the talented workforce in our state. We are proud that this partnership puts Alabama on the forefront of technology in this dynamic global industry.”

The plant will be Toyota’s 11th in the United States, representing its continued commitment to the country (an important thing in these political times) on top of the $10 billion Toyota already announced it would invest over the next five years.

For Mazda, the manufacturing plant will be its first in the US, though the automaker has operated in the US for half a century. The new Alabama facility will help it better establish a presence in the American market.

“Our investment to establish a new vehicle assembly plant with Mazda builds on the strong success we have enjoyed in Alabama where we produce engines for the North American market,” Toyoda said. “Starting from 2021, I’m confident that we will run a highly competitive plant, by bringing together the expertise of Toyota and Mazda as well as the excellent Alabama workforce. We are committed to being another ‘best-in town’ company in the city of Huntsville and the state of Alabama, a new hometown for Toyota and Mazda.”