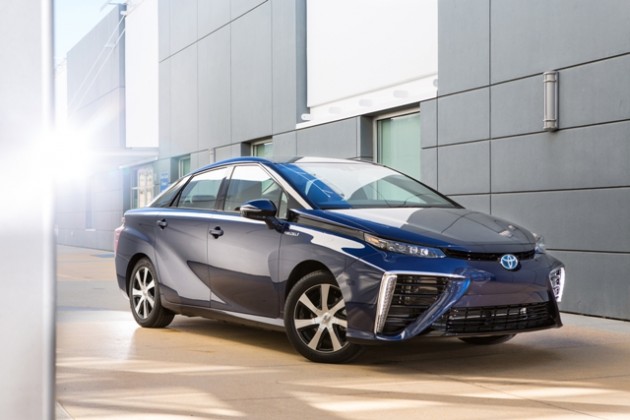 A few months ago, we heard rumors that the upcoming Toyota Fuel Cell Vehicle would be named “Mirai,” which is derived from the Japanese word for “future.” This seemed like a good move, considering the vehicle will be the future of Toyota. And now, we’re getting confirmation from the man himself, Akio Toyoda, who confirmed today that the FCV would adopt the moniker “Mirai.”

The Toyota Mirai fuel cell vehicle will arrive in certain California markets sometime in 2015, and will offer drivers an eco-friendly alternative to gasoline vehicles. The car will have a range of 300 miles for each tank of hydrogen, and drivers can refuel the vehicle in less than five minutes. The only issue standing in the way of widespread adaptation is refueling infrastructure. Currently, California is working on developing a more widespread network of refueling stations in order to support hydrogen fuel cell vehicles like the Mirai, the Hyundai Tuscon Fuel Cell, and the Honda FCX Clarity.

Toyota knows that without a strong hydrogen refueling network, its Mirai fuel cell vehicle will see much less success. In order to help support the vehicle’s release, the Japanese automaker is partnering with Air Liquide to develop a new network of 12 refueling stations located in New York, New Jersey, Connecticut, and Rhode Island. Currently, FirstElement Fuels is working on building 19 refueling stations in California thanks to a $7.3 million loan from Toyota and funding from the California Energy Commission. The California network should be in place in time for the Mirai’s 2015 release, and the East Coast network will provide options for drivers in those four states to make the switch to hydrogen.

We look forward to the release of the Toyota Mirai, which is scheduled for sometime mid- to late-2015, and will keep reporting on any updates we hear!