Toyota Named Corporation of the Year for Support of Hispanic Community 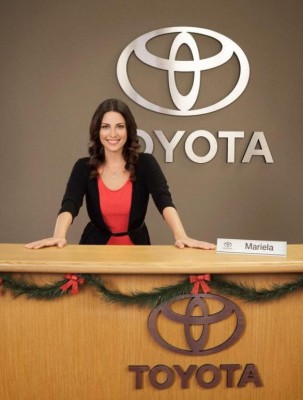 Toyota even has a Latina version of its Jan character–Mariela

Every year, the US Hispanic Chamber of Commerce (USHCC) names one business its Corporation of the Year for championing Hispanic enterprise. Yesterday, at the organization’s conference in Houston, the USHCC announced that Toyota would carry the title. The award was presented to Toyota at the USHCC Million Dollar Club Breakfast today, Tuesday, September 22nd.

Know Your Tires: This is why your tires wear irregularly

“Toyota has been a proud supporter of the work of USHCC and its mission for 24 years,” explained Patricia Salas Pineda, group vice president of Toyota’s Hispanic Business Strategy Group. “Being recognized as Corporation of the Year is a very special distinction that serves to propel our work in supplier diversity even further.”

Toyota belongs to the highest level of the Million Dollar Club. The club honors organizations which commit to supplier diversity with at least $1 billion in contracts with Hispanic-owned companies. Additionally, Toyota has been the number-one selling automotive brand in the Hispanic market for the last 10 years.

As well as belonging to the USHCC Million Dollar Club, Toyota is a founding member of the Billion Dollar Roundtable. The Roundtable recognizes corporations which spend at least $1 billion with suppliers owned by either minorities or women.

“We are thrilled to honor Toyota as our 2015 Corporation of the Year,” remarked Javier Palomarez, USHCC president and CEO. “As the world’s top automaker, Toyota demonstrates that global industry leaders can empower minorities while building a profitable business model. By constructing their vehicles where they sell them, Toyota supports local suppliers and economies. We look forward to their continued partnership with the Hispanic business community.”

The Sky’s the Limit: Learn about Toyota’s flying car