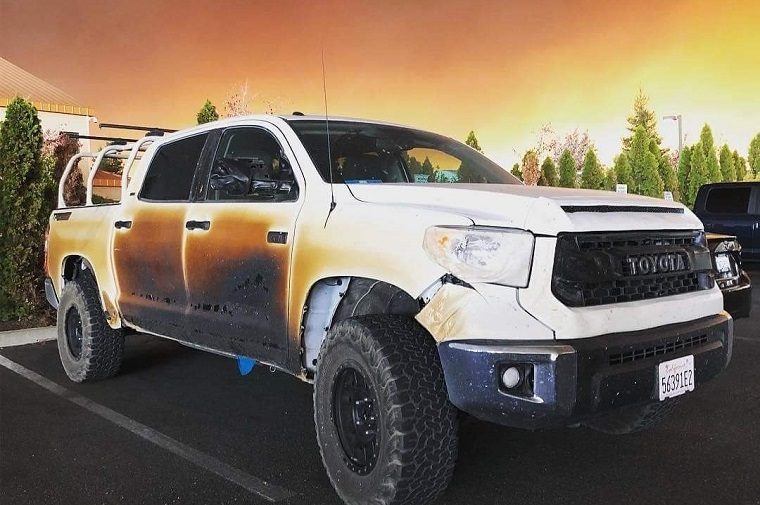 Allyn Pierce is a nurse in the intensive care unit at the hospital in Paradise, California. When he received the order to evacuate, the heeded the call but became stuck in a gridlock of evacuated cars. At one point, with the flames closing in, he did not expect to survive and recorded a message to his family on his phone.

Fortunately, a bulldozer suddenly appeared. It cleared the traffic, including a burning truck that had been blocking the road. But rather than flee to safety, Pierce went back into town to the hospital to care for injured patients. After firefighters cleared a path to safety for the staff and patients, Pierce began to shuttle people out of the fire in his Toyota Tundra.

By the end of the ordeal, the pickup truck was not in a great shape. Its white paint was cooked to a dark brown and the light lenses had turned to go, though the lights themselves — along with the rest of the truck — continued to work.

With his truck damaged, his house gone and his job likely lost as well, Pierce reluctantly directed his Instagram followers, where he posted pictures of the truck, to a GoFundMe page that a well-wisher had set up for him.

Toyota got wind of the story and offered to give him a new truck. “Our hearts go out to the victims of the devastating California wild fires,” the automaker said in a statement. “We are extremely grateful to all of the emergency crews who are working tirelessly to extinguish the fires and helping people to safety.”

“We are especially thankful to one hero in particular, Allyn Pierce, for risking his life and sacrificing his Toyota Tundra to drive people to safety. Toyota is so humbled by Mr. Pierce’s selfless act that we’re pleased to offer him a brand new Toyota.”

Pierce has yet to comment on the offer, though he’ll no doubt be pleased, considering that nearly all of the pictures he posts on his Instagram are of his truck.

Toyota is also offering payment relief options to its customers recently affected by the wildfires throughout California.