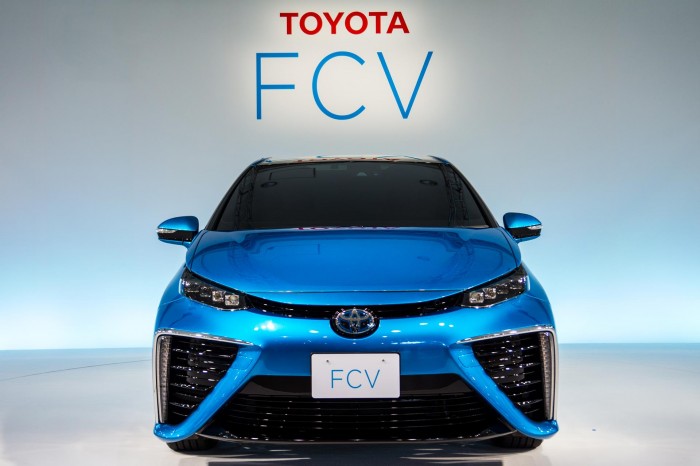 The long-awaited moment is finally here. After months of anticipation, Toyota has revealed the production Fuel Cell Vehicle’s (FCV) exterior for the first time, and given us an approximate price tag for when the vehicle goes on sale in the Japanese market before April of next year. The European and U.S. markets aren’t far behind, with a projected launch date of summer 2015. [ Video: See the Toyota FCV in action! ]

The FCV sedan’s exterior borrows heavily from Toyota’s concept version, first seen at the Consumer Electronics Show in Las Vegas earlier this year. Its blue color and lines bring to mind a clear ocean, with gentle waves coursing across its surface. The sedan has a vertical strip of LED lights in each corner of the front air intake, giving it a slightly menacing appearance.

As for pricing, Toyota announced that the FCV would have a pre-tax price of around 7 million yen, which translates to around $69,000. However, this isn’t to say that the U.S.-spec version will cost that much—in fact, Toyota mentions in its press release that the official pricing for U.S. and European markets has not yet been calculated. In addition, Toyota is keeping information regarding specs and features under wraps for now, although we do know that the car’s cruising range is approximately 700 kilometers (around 300 miles), and that it will accelerate from 0 to 60 mph in around 10 seconds. Finally, the FCV will refuel in around three minutes, making it much easier for daily driving than electric vehicles. Always the innovator, Toyota has been developing hydrogen fuel cell technology for over 20 years. Hydrogen not only burns clean; it’s easily produced using sustainable practices like wind and solar power. So the FCV is a double whammy of efficiency, both for drivers and for the planet. See the video!