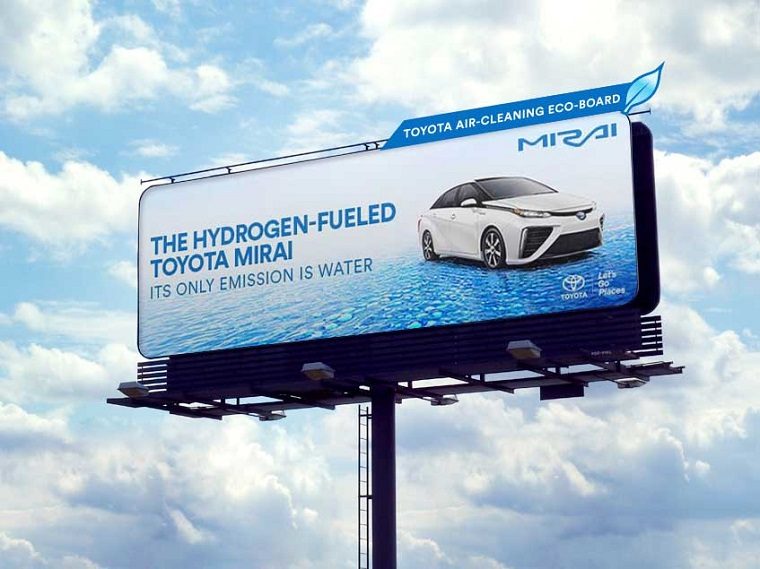 Given that the Toyota Mirai fuel cell vehicle is powered by hydrogen and emits only water vapor, it makes sense that Toyota would focus on the green aspects of the vehicle in advertising, right? It seems, however, that the automaker wants to do more than just that.

Toyota teamed up with PURETi Group, LLC to develop new “eco-billboard technology” to advertise the Mirai FCV in select California market that actively purifies the air around it.

The board is made of a special titanium dioxide-coated vinyl that reacts to oxygen, converting nitrogen dioxide (NOx) into nitrate and removing the noxious gasses from the air. All it needs to work is light and humidity as well as air passing over the coating—all three of which are plentiful in the Californian skies.

Toyota and Clear Channel Outdoor Americas will set up 37 of these eco-billboards to advertise for the Mirai, which will be seen around Los Angeles and San Francisco from April 3 to May 28. NOx is a major cause of smog and acid rain and Toyota says its 25,000 square-feet of billboard surface will help reverse the NOx equivalency of more than 5,000 vehicles over the course of a month.

“Toyota consistently searches for new environmental technologies across all operations. When Clear Channel Outdoor Americas brought us the opportunity, we saw it as a perfect match,” said Mark Angelacos, advanced technology general manager for Toyota Motor North America, in a release. “This new campaign delivers Toyota Mirai’s ‘vehicle of change’ message on a medium that lives up to that promise.”