[TRAILER] ‘Kung Fu Yoga’: When You Put Jackie Chan & a Lion in an Infiniti QX

2017 is already looking like it’s going to be a great year for movies–and we’re not just talking about the bajillion super hero films coming out (aren’t people sick of those by now?). Two entertainment behemoths have teamed up to produce one of China’s most-anticipated films of 2017. The rollicking antics of Jackie Chan meets the colorful, high-budget styling of Bollywood in Kung Fu Yoga, a Chinese-Indian co-production.

And why are we especially interested in Kung Fu Yoga? Apart from the fact that it looks like a wildly entertaining ride, there’s going to be a lot of good-looking cars in exciting chases.

Check out the trailer for Kung Fu Yoga below.

In Kung Fu Yoga, a Chinese archaeology professor (Chan) and his associates must race to stop a wily villain (Sonu Sood) in order to recover lost ancient treasures. Their pursuit takes them from Tibetan ice caves to downtown Dubai to a mountain temple in India. And, based on the trailer, it looks like a white Infiniti QX and a yellow McLaren will play major parts in the hunt.

Kung Fu Yoga has a lot of talented people involved. The director, Stanley Tong, has worked with Chan on previous films such as Rumble in the Bronx, the Police Story series, and Chinese Zodiac. Sonu Sood has played the villain in many hit Bollywood features like Dabangg and Julayi. There’s even a dance sequence by Farah Khan, apparently.

But the wildly over-the-top sequences involving that Infiniti SUV and the McLaren supercar look especially cool.

Chan is no stranger to stunts involving automobiles; his filmography is filled with dangerous work involving vehicles, from that breakthrough bus chase in Police Story to the auto racing-themed Thunderbolt.

As Chan continues to age, it’s unsurprising that a lot of his stunts–like those in Kung Fu Yoga–involve CGI and wire work. But, if it’s half as good as it looks, it’ll be far better than that other embarassing Indian martial arts effort Chandni Chowk to China. 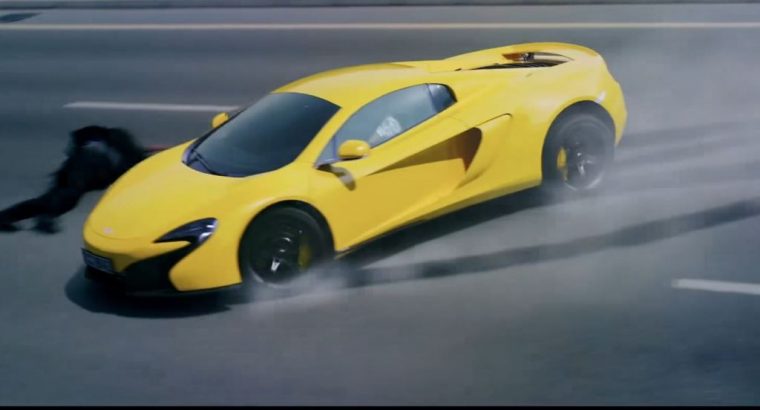