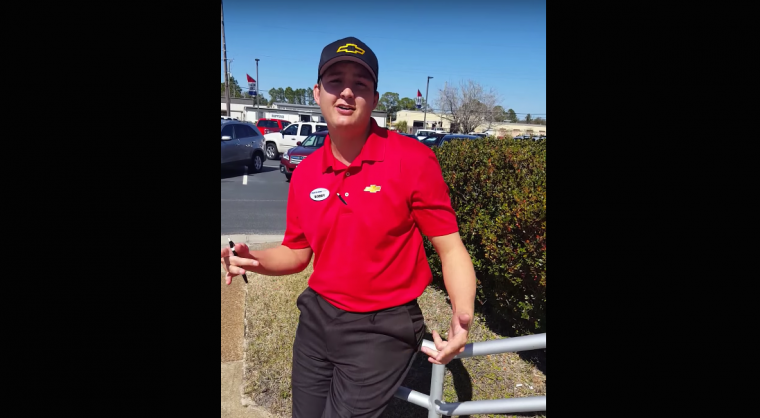 This may come as a shock to you, but Donald Trump supporters are something of a homogenous group.

Not only are Trumpeters overwhelmingly white, male, and likely to argue that “all lives matter,” but a whole lot of them even seem to possess the same exact creative instincts, too. Case in point—at least 21 of The Donald’s biggest fans appear to have independently chosen to write and record amateur campaign songs titled “Trump Train.”

Gawker recently decided to rank the 21 best “Trump Train” songs on YouTube (somehow, none of which are written by Ted Nugent), and awarded the #4 spot to Bobby Walkup, a used car salesman at Preston Hood Chevrolet in Fort Walton Beach, Florida.

Check out the sick rhymes and smooth dance moves that earned this Chevy salesman a spot in the Top Five:

Here are the full lyrics, just in case Bobby’s science was too tight for you to follow:

Rubio’s a choker, Cruz is a liar

She can hide Benghazi, but she can’t hide her mail

When Trump becomes president he’ll throw her in jail

Wow, what a great little ditty! Sadly, until the release of Bobby Walkup’s debut album, Straight Outta Fort Walton Beach (alternate title: Walkuptown), that’s the only one of his songs that you can listen to. He does have one other video, “Bobby Walkup on the Chevrolet HHR,” but it’s more of a spoken word thing.

No worries, though—I could listen to “Trump Train” all day long. My fellow Millennials, we finally have the songwriter that our generation deserves. I think that I can say, truly and without irony, that Bobby Walkup is to Bob Dylan what Donald Trump is to John F. Kennedy.

UPDATE: Bobby Walkup saw our story about him and reached out to us with the following message [sic]:

My name is Bobby Walkup i wrote the Trump Train Song Great article!! after realizing how many views i was getting i decided to go in the studio and do a professional version that already has even more views…here is the link

Feast your eyes upon this studio-quality updating of “Trump Train”