True, Undisputed Father of the Year Surprises His Daughter with a DeLorean [VIDEO] 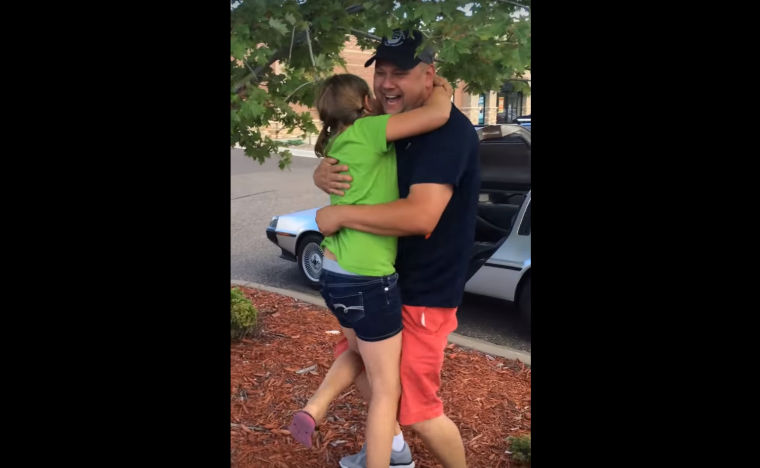 You know, the phrase “Father of the Year” gets thrown around quite a bit…

Remember that “Father of the Year” coffee mug you gave to your dad twenty years ago to let him know that he had won the title for 1996? Yeah, there were millions of those things made that year, which kind of delegitimizes the singular claim made by each one.

Even the National Father’s Day Committee, which has now been hosting the official Father of the Year Awards for 75 years, always bestows the title on more than just one person. This year, for example, they recognized three different people as FOTY: Vice President Joe Biden, former Jets quarterback Joe Namath, and the CEO of some Canadian department store chain.

And a look at the list of previous winners suggests that the committee doesn’t always make the right call. In 1945 the trophy went to Bing Crosby, who was later accused by his son Gary of being abusive and unloving, and in 2005 it went to Donald Trump, who has since been accused of being a bit too loving of his daughter Ivanka.

Even this site has been guilty of using the term too loosely—earlier this week, my fellow editor Sam called a guy who used a Corvette to pull out his son’s loose tooth 2016’s “Father of the Year.”

Welp, I’m sorry, but my friend and colleague Sam was wrong.

And so was the National Father’s Day Committee.

And so were you, if you used the superlative to describe your own pops this past Father’s Day… unless, of course, you are this little girl whose dad just surprised her with a DeLorean.

For Fathers: The best car gifts to get your dad for his birthday or Father’s Day

Now I know what you’re thinking—as cool as that was, how can you tell that this guy is “Father of the Year” based on just one awesome thing that he did? After all, Ryan Roberts was the only player to hit a walk-off super slam in 2011, but that one highlight didn’t win the career .243 hitter any National League MVP awards.

Well, even though the video is short, I think it provides ample evidence that this guy’s parenting style is elite throughout the season. These are what I see as the key signs of this father’s award-worthiness, as exhibited by his daughter:

Hey, better luck next year, all other fathers in the world. If you want to make another run at the title in 2017, maybe start saving up money now for that cherry Batmobile.