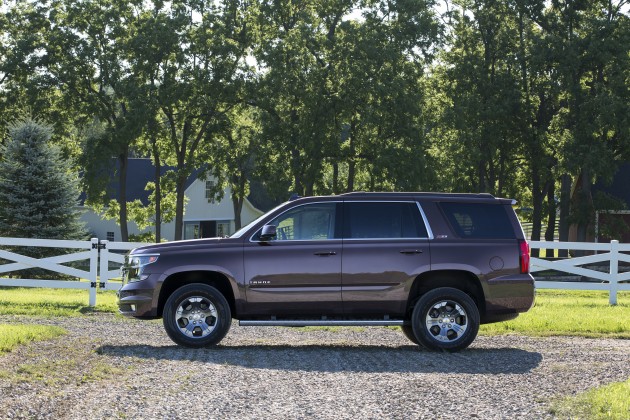 TrueCar’s analytics division, called ALG, recently named the 2015 Tahoe a 2015 ALG Residual Value Award winner. In total, 26 vehicles received a Residual Value Award from ALG, broken up by segments. The Tahoe is a newcomer to the award, which it claimed in the Fullsize Utility Vehicle division.

Sandor Piszar, the director of truck marketing at Chevy, said of the award, “The Chevrolet Tahoe is the best-selling full-size SUV and sales of the all-new model remain popular with customers as retail sales are up 41 percent year to date. This award proves that the Tahoe not only offers class-leading technology and performance at a great value at the point of purchase, but also provides great value when it comes time to sell as well.”

The awards this year were given out to 2015 model year vehicles. Award-recipients win not for an achievement per se, but for being predicted to be the most likely to earn an achievement three years down the line. That is, ALG takes statistics (varying from marketing strategies, pricing structures, production levels, and more) to determine which vehicle in each segment is most likely to retain the highest percentage of its original price three years after the fact. This year, one of those models was the Tahoe.

“The Chevy Tahoe, along with GM’s other truck-based utilities, are among the best in the business for hauling families and all their stuff,” said Larry Dominique, president of ALG, who knew that Chevy is very big on stuff, in addition to technology. “With the improvements to the drive experience, capabilities, fuel economy and comfort for 2015, the Tahoe will remain the vehicle of choice for thousands of buyers who need all it can offer, and we expect this demand to drive impressive value retention.”