Trump Calls Out General Motors in Statement, Then Pretends He Didn’t

2016 is an historic year in American politics if only because, for the first time in the country’s history, one of the presumptive nominees is a woman and the other is a nightmarish potato-person who has been dipped into orange food coloring that also somehow makes him racist. Donald Trump, the sole remaining candidate on the Republican side, is the racist potato, by the way.

Trump issued a statement on Tuesday defending comments suggesting he would not receive fair treatment from Indiana-born U.S. District Judge Gonzalo Curiel, who is overseeing the ongoing fraud lawsuit leveled against Trump University, on the basis of his heritage. He also saw it as an opportunity to add General Motors to the growing list of companies he is calling out for investing in Mexico.

From the original statement:

I am fighting hard to bring jobs back to the United States. Many companies—like Ford, General Motors, Nabisco, Carrier—are moving production to Mexico. Drugs and illegal immigrants are also pouring across our border. This is bad for all Americans, regardless of their heritage.

For a guy who says he’s not racist, he sure can’t stop talking about how bad Mexicans are. Sad!

Trump had previously attacked Ford for investments made in Mexico on multiple occasions (in spite of the fact that he actually has investments in the company), but this marks the first time that he has mentioned General Motors’ plans to move manufacturing to Mexico.

GM announced in December 2014 that it would be investing $5 billion in Mexico through 2018, creating upwards of 5,600 jobs in the country. The new Chevrolet Cruze is just one of the vehicles built at GM Ramos Arizpe, the oldest of four manufacturing facilities in Mexico that creates products for both domestic sale and export. GM Ramos Arizpe has been in operation since 1981.

GM and Ford are far from the only automakers with operations in Mexico: Honda, Mazda, Toyota, FCA, Renault-Nissan, Volkswagen, and BMW all have manufacturing facilities in the country.

In an interesting twist, the statement was updated sometime between Tuesday and Wednesday to exclude the reference to General Motors altogether. No doubt, this is so that when he is pressed on the issue during his next media rounds, Trump can bold-facedly lie about having ever said it in the first place.

Trump has yet to offer further comment on the matter, but he does have plenty of other important things to tweet about. 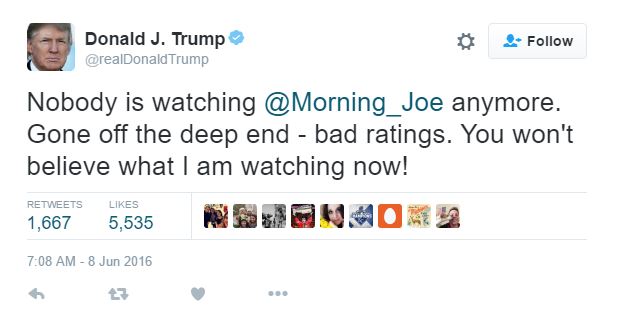 Neither a Trump spokeswoman nor GM spokesman Jim Cain were willing to offer comment.