Recently, my older brother moved back to Ohio from Northern Michigan. It’s a long drive, at least 10 hours, and clearly, he needed help. Being nice, my significant other’s apparently extremely trusting dad offered to let me borrow his truck to help out.

However, when I offered this information to my brother, he refused, because since this was the Upper Peninsula and it was April, there was no way that I would not, at some point, drive through a rainstorm, so his things would get pretty well soaked.

A few weeks after the move, I received the answer to that problem on my desk: Tuff Truck Bags. 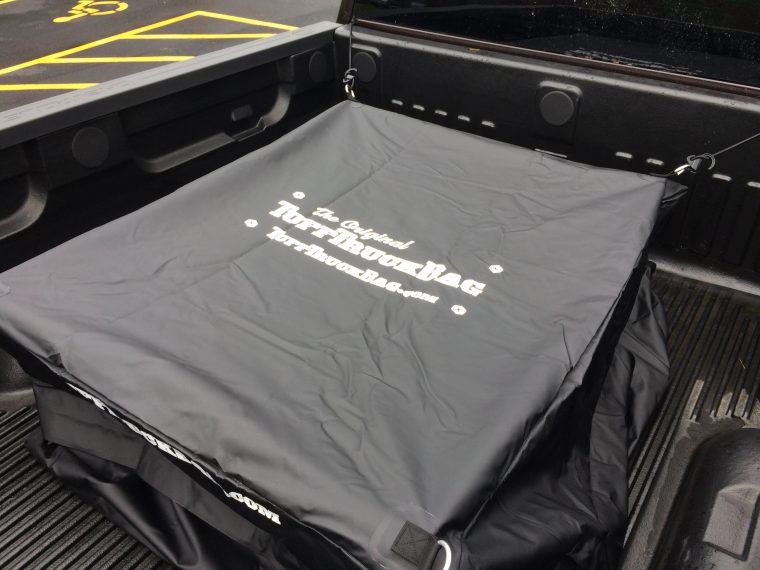 According to the creator of Tuff Truck Bags, Philip Dozier, these bags trace their history back to road trips to the beach. Dozier and his family live in southern Alabama, a relatively short drive from the beaches of the Gulf. However, this being Alabama in the summer, sudden thunderstorms were a common occurrence, leading to a frantic rush to get everything inside the cab of the truck before it got soaked.

After an internet search, he found nothing that he liked (as he said, he doesn’t like tonneau covers), so he and his son set about inventing. Eventually, they ended up with the current product: a large PVC bag, with a heartily-sized zipper running across the front about 10 inches up and wrapping around both corners. Oh, and no stitches reaching into the bag. According to Dozier, if it has stitches, it would eventually leak, so he took pains to ensure that even the corner D-rings wouldn’t have anything intruding into the interior (he got a patent on the design). All the seams are epoxied and heat-sealed. 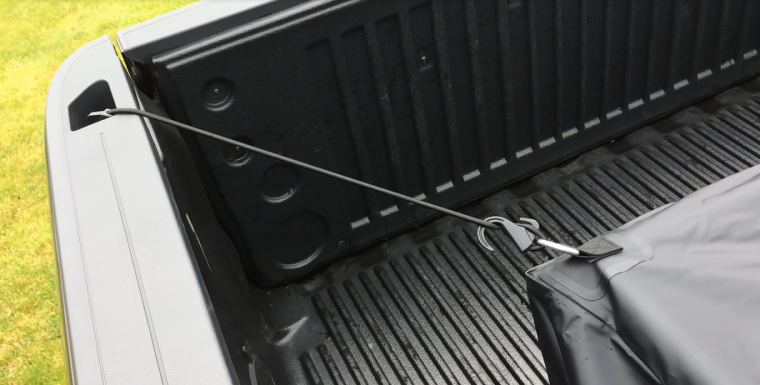 The bungee cords are somewhat unique, in that they have an interesting double-hook design that allows you to adjust how tight the bungee cord is.

The bag covers a good amount of space in a full-size truck bed, and attaches to the sides using four included bungee cords. It is intended to be put up easily, then taken down again when you reach your destination, rolled up, put in the storage bag, and tossed in the truck until it’s needed again. 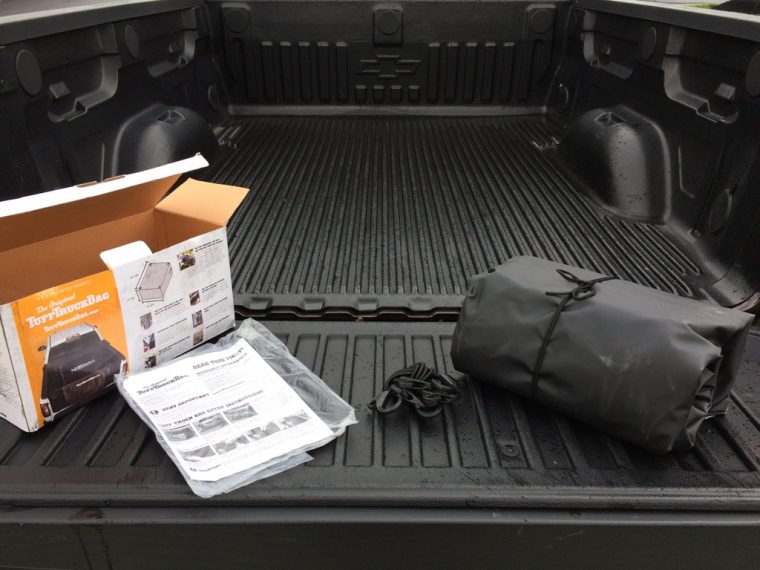 The bag came originally wrapped up tight in a box, along with a knot of four bungee cords and a page of instructions, all contained by a pair of industrial-looking plastic straps. The box included a hole cut in it for people to touch the bag. Dozier said that this was to reassure people that despite the steep-seeming price tag, this was a product that would last for years.

I had to admit, he had a point—after touching the bag, I could tell it was made of sterner stuff than some mere polyester canvas duffel bag. The material almost has a waxy, leathery, soft feel to it on the outside, although on the inside it is shiny and feels more like rubber.

Also, it is large—I stuck my head inside to get a feel for how much space was in there, and it felt cavernous. 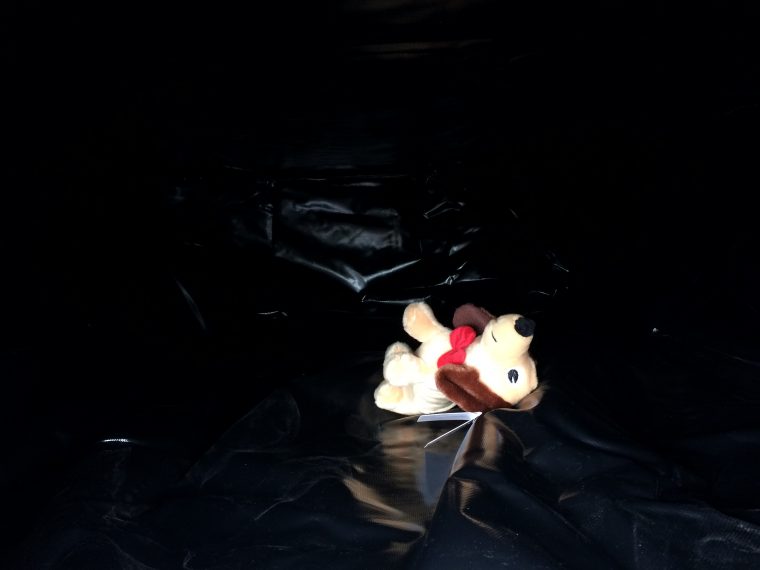 Eventually, the bungee cords became a problem, though. The tester (aka “guy I knew who owned a truck”) left the bag in his bed all the time (he lives in a good neighborhood), and after about a month of driving around with the empty or mostly empty bag flapping in the wind, you could see that the bungees were starting to give up the ghost. They still held the bag up like always, and I suspect they might have just continued holding the bag like always, only eventually losing their elasticity. However, they would not have looked pretty doing so. 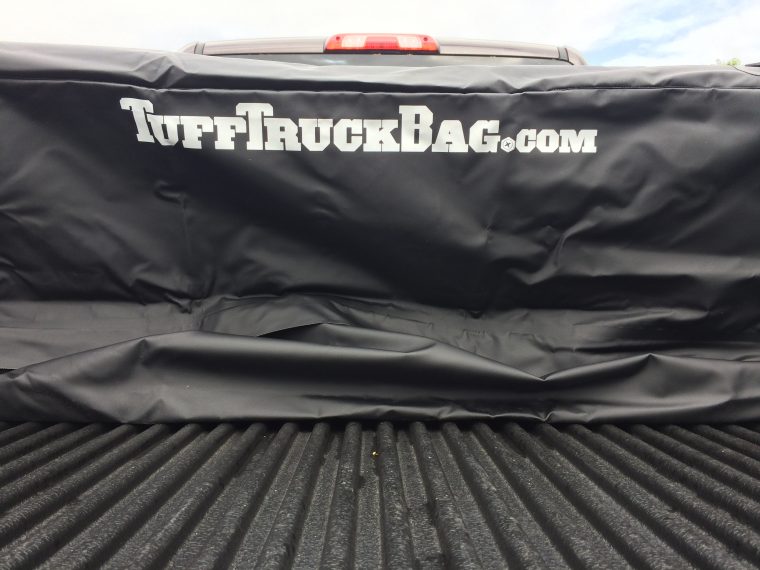 Instructions to Use Product

Instructions for use are pretty simple (minus the interesting way you need to wrap the bungee cords around their hooks, but that is explained quite well in the included instructions). It is a bag for your truck bed. Put it there, and use the bungees to attach the four D-rings on the corners to four points on the bed. Then, put your stuff in it, zip it shut, and pull the big flap down over the zipper. Drive wherever you were going. Take your stuff out. Roll up the bag, and put it in the truck. Repeat the steps when you make the return journey. Honestly, the concept is pretty simple, and the genius lies in the execution of making a durable bag. 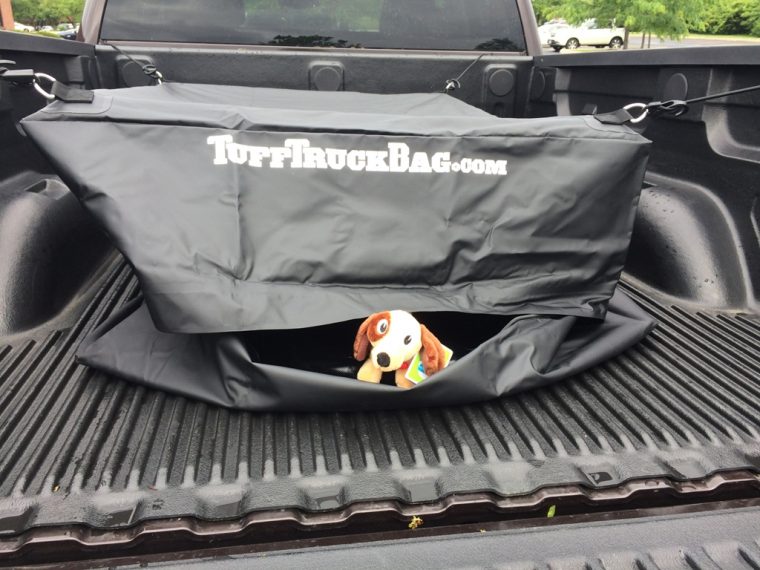 Overall Assessment: Does It Do What It Claims?

Yup. Like I showed in the video, to test the bag’s waterproof-ness, I put a little stuffed dog into the bag (Side note: don’t put anything living inside the bag. That thing is pretty close to airtight) and ran it through an automated car wash to simulate a storm on the road. By the time I parked and retrieved the little doggy, it was completely dry. Promise kept.

There are some things to remember, though. The bag is only supposed to be used when you are on the road–like the website says, “use it when you need it, store it when you don’t.” It isn’t meant to stay in your bed permanently.

Also, keep in mind that the bag is not made from breathable material. Like our tester found out, if it is left unzipped in the humid air of southern Ohio, water will condense inside the bag. And, since the bag is waterproof and the material is not breathable, that water doesn’t go anywhere. Luckily, the bag can pretty easily just be turned inside out and allowed to dry, and it’ll be good as new. 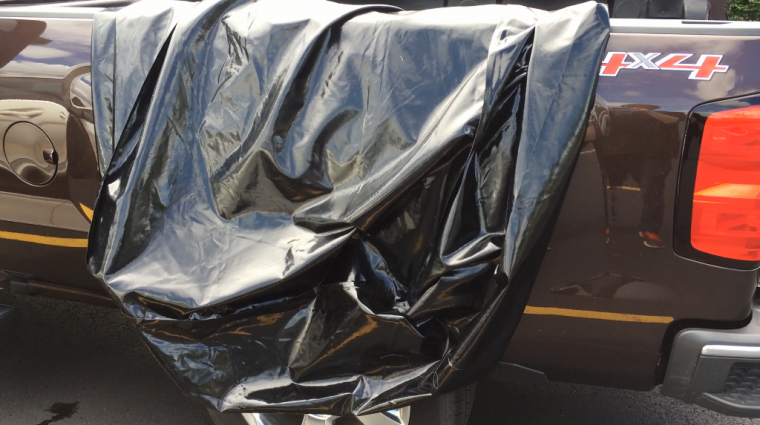 I wish that I knew better how the bungees would hold up under intended use. The tester left the bag up all the time, often mostly empty so it flapped in the wind, so the bungees were under tension constantly for a month and stressed often. However, I can’t imagine that the bungees would last as long as the bag will. 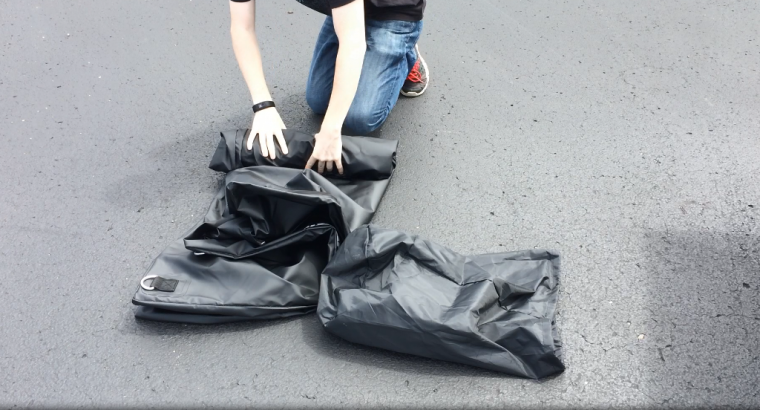 Rolling it up and putting it away was astonishingly easy. I fully expected a struggle on par with putting a sleeping bag back in its tote bag, but the Tuff Truck Bag rolled up very easily and the storage tote was large enough that I could put it away with minimal effort on the first try.

Overall, I am very impressed with the Tuff Truck Bag, as was the longer-term tester, who only wished that there were zipper vents of some sort in the event of water getting inside. And, if Philip Dozier’s bag is any indication (he has used the first one that he made for 10 years, now), the bag makes for a good, long-lasting alternative to buying some bulky bed cover to protect your things.

or one of its dealer locations.