GM CEO Mary Barra calls the decision "difficult." You know what else is difficult? Burying your child because of something that could have been easily avoided if someone else had taken responsibility. That's difficult. 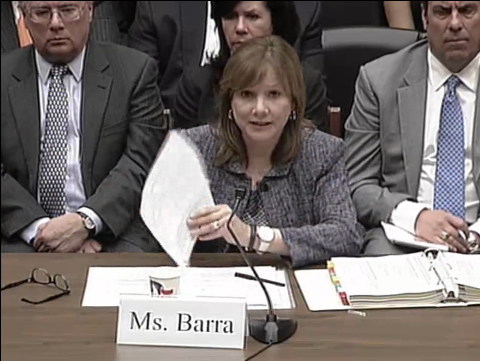 Heads have begun to roll at General Motors after Anton Valukas’ independent investigation into just how deep the incompetency that led to 2.6 million recalls and at least a dozen deaths runs. As a result of the investigation, Mary Barra is pulling out her CEO scythe and going headhunting. None shall be spared, and no one who is accountable shall…wait, you mean they’re only putting two GM engineers on paid leave? Are you serious?

Yes, they are serious.  Two unidentified GM engineers were given paid leave after they were found to be in some way culpable for the ignition switch problem that has resulted in at least 12 deaths.

“This is an interim step as we seek the truth about what happened,” said Barra in a statement received by Detroit News. “It was a difficult decision, but I believe it is best for GM.”

No, Mary. Giving what is essentially paid vacation to two people whose inability to properly perform their jobs may have helped facilitate the deaths of other people is not a difficult decision. Picking out what clothes you want to bury your son or daughter in after they die in an accident behind the wheel of a GM vehicle whose airbags failed to deploy is a difficult decision.

Barra announced at a town hall meeting on Wednesday that GM will be instituting an internal safety campaign that will “recognize employees who discover and report safety issues to fix problems that could have been found earlier and identify ways to make vehicles safer.”

You know how you reward someone who works in the automobile industry who discovers and reports a defect that could potentially end peoples’ lives prematurely instead of—oh, I don’t know—covering it up?

Thank them for doing what they’re supposed to do as decent and honest human beings.

We will have more of the latest from the GM ignition switch debacle as it becomes available. We know you want to find out what happened as much as Mary Barra does. Hopefully, when she does discover what happened, she’ll do a little bit more than give people some time off with full pay.