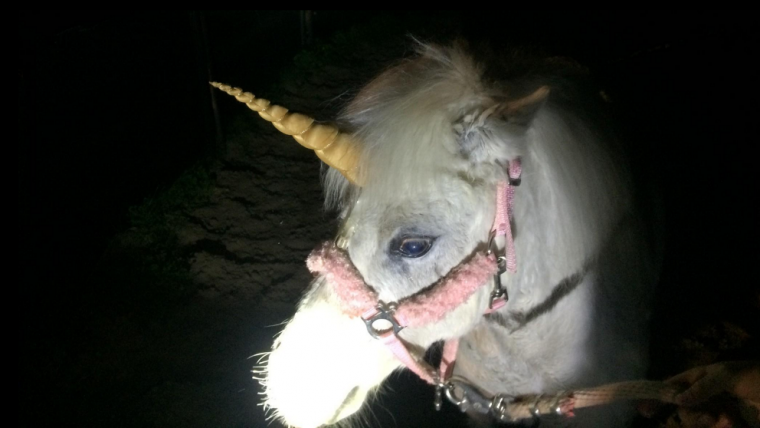 While I wish that I could now say that unicorns were real and walking among us, in reality the “unicorn” was a 20-year-old Shetland pony named Juliet with a fake horn. Juliet was dressed like a fantastical creature for a photo shoot, and apparently was not ready for her closeup when she bolted not once, but twice from the scene. Juliet’s owner called the California Highway Patrol for help, and they originally thought it was a prank call. I mean, if someone you knew called to say they saw a unicorn on the run, wouldn’t you be a bit concerned about what they may have ingested recently?

This story gets even better, because not only was there a unicorn on the loose, but it took the CHP three-and-a-half hours to capture this little pony. Officers didn’t just chase down the poor enchanted creature, they pulled out the fancy toys and used a helicopter with thermal imaging to find Juliet in an orchard and use one of her equine friends to coax her out of hiding. To be fair, unicorns are not supposed to be easy to catch, so Juliet was just really committed to staying in character. The Highway Patrol also brought in the helicopter when they were concerned that the unicorn would move from the (relatively) calm road she was on to the busier Avenue 12, where an unfortunate accident might have occurred.

I’m happy to report that Juliet was not cited, but her owner was given a warning from the police that future escapes could result in a ticket, because the unicorn/pony could have done actual damage to something other than the CHP’s pride if she had gotten lose in a more populated area. Juliet, you are a beautiful creature, and we hope you continue to run free, just far away from the roadways. We dedicate this playing of Lady Gaga’s “Highway Unicorn” to your indomitable spirit.