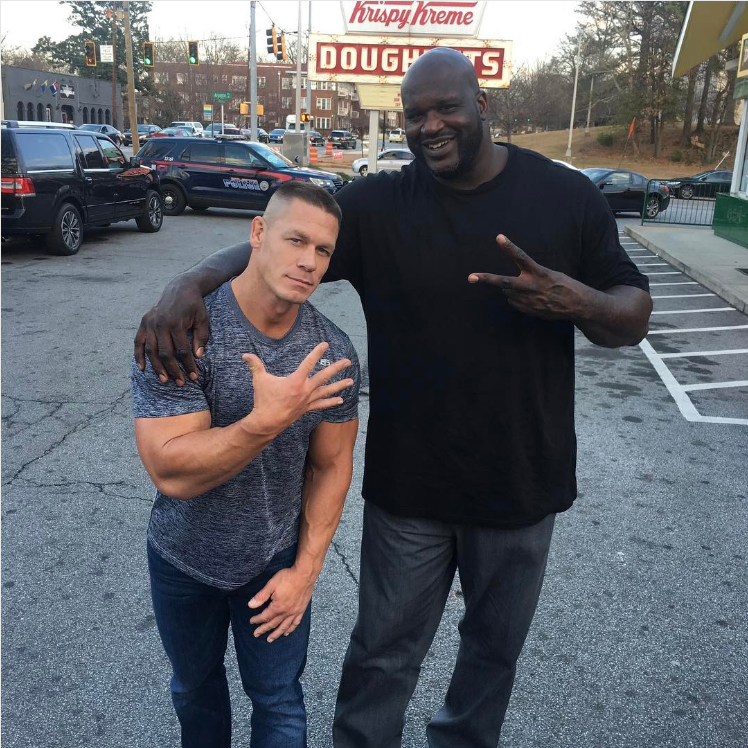 John Cena and Shaq for those who have been living under a rock
Photo: Shaq

If you haven’t heard yet, the famous Carpool Karaoke segment on The Late Late Show with James Corden is getting its own program on Apple Music TV. As Apple Music’s first original show, the intimate interview/sing-along has a lot riding on its shoulders. To help carry that heavy weight, it seems as if producers have called on John Cena and Shaquille O’Neal to save the day.

Ready To Pump You Up: Learn about the all-new Nissan Pathfinder

On Friday, Shaq took to Instagram to post a picture of him hanging out with John Cena in the parking lot of a Krispy Kreme Doughnuts. The caption reads simply “Chillin with the great John Cena. Carpool karaoke comin soon.” Later on Today, John Cena clarified that this was no regular Krispy Kreme, but rather one owned by Shaq himself in Atlanta.

Many observers have noticed a lack of Late Late Show host James Corden in any pictures or discussions. That could simply be because the show on Apple Music TV will not be hosted by him, but rather by several different hosts. It could also be that John Cena had to make someone else invisible so that we could actually see him in the picture.

Since Shaq is preparing to wrestle with The Big Show at Wrestlemania this spring, it is possible that whatever is being filmed is actually meant to be a companion video to the main event. Rumors are spreading that the big guy himself might make an appearance at this Sunday’s Royal Rumble to actually accept the challenge, so perhaps some footage might be used there. It would certainly make Shaq’s chances at winning look better if he was hanging out with the 15-time champion for some pointers.

Either way, we could be in for a treat, as both Cena and O’Neal are confident enough in their singing to do it on television. John Cena taught the audience at a Conan taping how to properly sing about how he sucks, and O’Neal has sung a beautiful rendition of “Maneater” on Inside the NBA. This is sure to be some exciting and hilarious video.

Stronger than Ever: Check out the great towing capacity for the Nissan Titan XD