A Florida man decided to head-butt a bus over his un-"fare" treatment.

Throwing a temper tantrum in public is quite embarrassing. It can also be dangerous, as one Florida resident discovered. When he was told he had to pay an extra fee to reach his destination, he reacted as any sane human being would: he head-butted the bus!

Winter Haven Police have shared a surveillance video of the incident on their Facebook page in hopes of identifying the anonymous man who thought he was a ram.

File this under what NOT to do when you get mad regarding bus fare – ouchOn 7-18-15 at approximately 11:35 a.m., an unknown male exited a transit bus at the Winter Haven Area Transit bus terminal (555 Ave. E, NW, Winter HavenFL) . The bus made its regular stop, but the passenger evidently wanted to travel to a new destination. When the bus driver told him that it would be an additional $2 to travel to another stop, the rider became extremely agitated.The bus driver exited the bus, locked the door and went inside of the enclosed part of the terminal area. The passenger sat on a bench for a while, then walked away. Approximately four minutes later, the rider comes back and takes out his frustration on the bus by head butting the glass doors, shattering the glass.As you see in the video, it appears he knocks himself out for a few seconds.He eventually gets up and runs off.He is a black male, approximately 5’9″ with a slim build. He was wearing slip on shoes with socks, glasses and dark green or gray shorts. His t-shirt has the graphic “Ounces 40” on the front.Anyone with information on who this suspect is asked to call Officer Jodi Lott at 863-401-2256.

The incident occurred last Saturday around 11:35am at the Winter Haven Area Transit. After being dropped off at the routine spot, the unidentified man decided he wanted to go to another location. 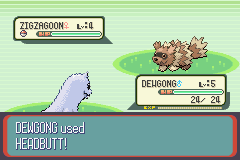 Bus Passenger used headbutt. But it hurt itself in confusion
Photo: Nintendo

The passenger became agitated when told the news, and began to storm off, presumably to cool his temper. The driver proceeded to lock the bus and leave the enclosed part of the bus terminal.

Not even five minutes later, the unidentified passenger returned to extract his revenge in the most headache-inducing way possible. Commencing with a head start, the man charged at the bus full-steam ahead and head-butted the door!

Damage to the bus included the glass of the bus door shattering. Damage to the man included passing out for a few seconds, and presumably brain damage. After getting up, the unidentified passenger proceeded to wobble away.

A feat of such idiotic bravery deserves its place in the headbutt hall of fame!