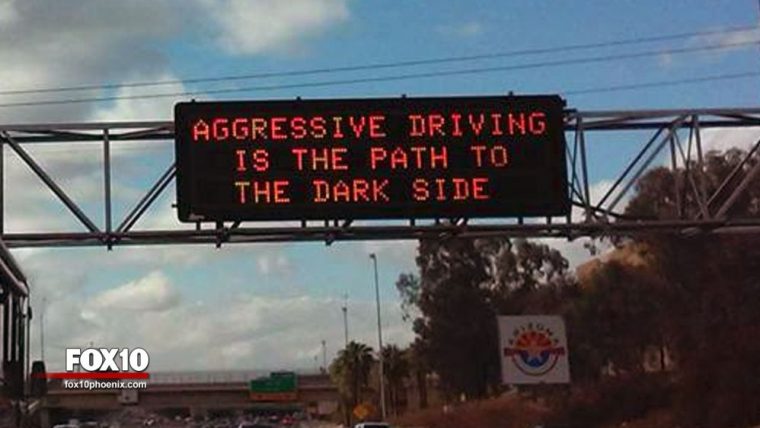 Everyone knows that this weekend is a big deal for Star Wars fans around the world.* The seventh installment in the storied film franchise, The Force Awakens, will finally enter theaters to be loved (or hated) by millions. This means that there is Star Wars mania absolutely everywhere, from cereal boxes, to Saturday Night Live, to Dodge cars, to Waze.

The Arizona Department of Transportation decided that this would be a perfect opportunity to reach out to drivers with a message that is relevant both to pop culture and car safety. Many large digital traffic signs on Arizona’s roadways now read “Aggressive Driving Is The Path To The Dark Side”.

At first, I wondered if this was a prank, since this would not be the first time digital traffic signs had been hacked (remember the “Caution! Zombies Ahead!!!” signs in Texas?). However, it seems these signs are legitimate, as they have been proudly shared online by ADOT and Doug Ducey, the Governor of Arizona.

.@ArizonaDOT is at it again. May the force be with you on the roads this Christmas season. #TheForceAwakens pic.twitter.com/y7PDNTi6jF

The trend is catching on across the United States, with the Colorado Department of Transportation choosing “The Force Is Strong With You, Put Down The Phone”. Iowa reportedly has many Star Wars phrases in use across the state, including “Road Rage? Let The Wookie Win” and “Be A Rebel, Not A Clone. Put Down The Phone”.

Patience, young Jedi. You will get there soon. Eyes off your phone and instead on the road. #JediDriver pic.twitter.com/AnaPoVsSem

I can just imagine the meetings where the Star Wars fans in each Department of Transportation got together to think of what to put on these signs. To be fair, these signs are timely and somewhat witty. It is just very hard to not compare Star Wars DOT safety messages to dad jokes.

As if you can forget, Star Wars: The Force Awakens officially opens in the United States on December 18th. Whether you find these traffic signs funny or annoying, please drive safely, especially in a snow storm. 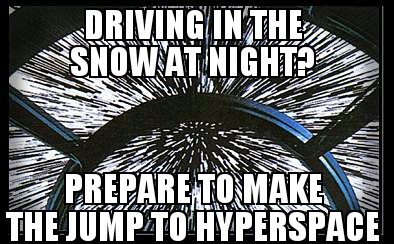 *If you’re just now hearing about Star Wars: The Force Awakens, I would like to personally welcome you back to the world after your stay under a rock in some distant (non-Tatooine) desert. I recommend you start with our teaser trailer coverage to get caught up on what’s happening in the Star Wars universe.