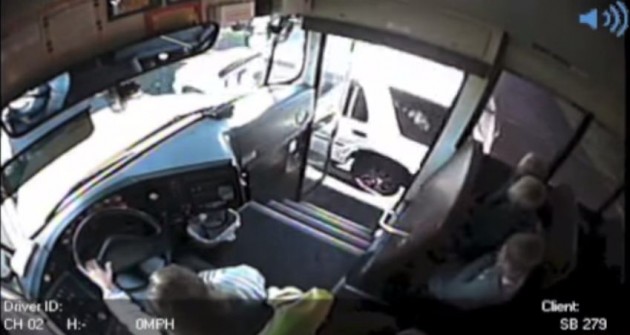 Warning: the video below depicts a narrowly-avoided tragedy. While no one was hurt during the incident, it is nonetheless uncomfortable to watch, so we advise you to proceed with caution.

A terrifying video captured by a school bus in Pierce County, Washington, depicts a white SUV passing a school bus on the shoulder and just missing hitting three children getting ready to board.

Shopping for a New Ride? Benefits of the GM Preferred Owner Program

According to Tacoma’s The News Tribune, the bus stopped to pick up three students on April 24th around 7:25 am. Despite the bus’ flashing lights and stop sign, a white SUV races up the shoulder of the road on the right side of the bus and, in the process, barely avoids hitting three children getting ready to board.

How close was this to being a nightmare scenario for the community? One child’s shoe was skimmed.

Bethel District spokeswoman Krista Carlson asks that anyone who has any information contact the Pierce County Sheriff’s Department at 253-798-4721. To help find the horrible human being responsible, commenters over at Jalopnik did some analyzing and seem fairly confident that the vehicle in question is a 1998-2004 GMC Jimmy SLE with a sunroof.

In conclusion: if a bus is stopped with its lights flashing and the STOP sign deployed, stop.