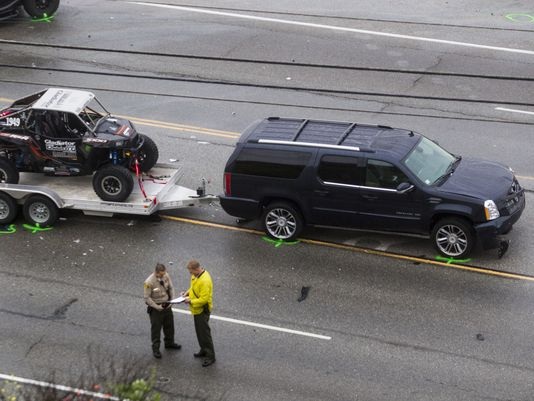 A photo of the aftermath of the fatal car accident that Bruce Jenner (now Caitlyn Jenner) was involved in a few months ago
Photo: Twitter

Video of Caitlyn Jenner’s fatal crash that took the life of 69-year-old Kim Howe has finally been released to the public.

Here is the video of Jenner’s Cadillac Escalade colliding with the back of Howe’s white Lexus, which preceded the Lexus’ head on collision with a Hummer:

Jenner was not charged with a crime, but a criminal probe of the crash is still ongoing and it has been suggested the final report is expected to be submitted to the district attorney in mid-July.

Jenner is also facing two very serious lawsuits associated with this crash. One a wrongful death lawsuit filed by Howe’s step-children and another property damage and personal injury lawsuit filed by 29-year-old Jessica Steindorff, who was driving the Prius that Jenner collided with after hitting the Lexus.

When this crash happened on February 7th, it provided the first photos of Jenner’s rumored gender transformation that later were confirmed by an April TV interview with Diane Sawyer, which was recorded prior to this terrible accident that happened in Malibu, California.