[VIDEO] Madness, World’s Fastest Hearse, Lives Up to its Billing

There’s an old saying that a good method of existing involves living fast, dying young, and leaving an attractive corpse. Arne Toman, the VP of AMS Performance in Chicago, took that particular adage and appended it to read “live fast, die young, leave a good-looking corpse, and get carried to the grave by a 1,000-horsepower hearse (because the hell with sanity, that’s why).” 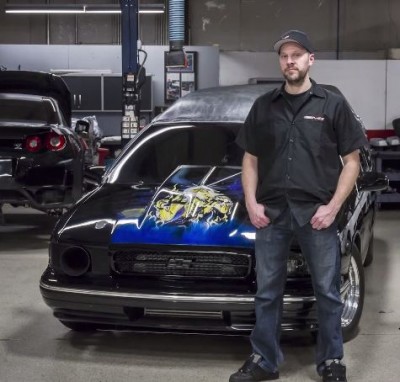 Toman, who strikes one as a completely amicable and friendly man who might also be slightly insane, was one day researching the record for the world’s fastest hearse. Not only was he probably surprised to find that there actually was a record for such a thing, but that it’s one that is surprisingly heavily-contested.

When Arne was in the middle of putting together ideas in 2008-09, the world record for fastest quarter-mile in a hearse was 13.72 seconds from a corpse-buggy out of Australia called “Undead.” In March 2010, when Arnie was well into his mad science project, a hearse from Transylvania (of course it was from Transylvania) called “Stiff Shifter” crushed the old record by posting an 11.6 second quarter-mile.

Arne found himself unimpressed with the numbers he saw. Like Dom from The Fast & The Furious, he wanted a ten-second car. And by gawd, he was gonna get it. Arne Toman isn’t just the kind of man who sees a world record for the fastest vehicle designed specifically to carry dead people and things “meh, I could make one faster;” he’s the kind of man who goes out and makes one faster.

And so he did, and he called it “Madness.” After briefly considering a model based on the Buick Roadmaster, Toman took a 1996 Chevy Caprice and stuffed a GM LQ4 6.0 Chevy V8 and a turbocharger under the hood. The result: a new record-holder that got a ridiculous 1,000 horsepower and can go from 0-60 in 2.26 seconds. That means Madness is faster than the Lamborghini Sesto Elemento, Bugatti Veyron Super Sport, Pagani Zonda R, and Ferrari LaFerrari.

Note: the following video from AMS is, all respect due, much better than the Barcroft report above if only because 1) Vincent Price 2) Iron Maiden. Arne’s enthusiasm for Maiden is certainly worth noting—the ghoulish figure painted on both the hood and the coffin stuffed in the boot is that of Maiden’s mascot Eddie, and the name Madness itself is derived from the Iron Maiden tune “Can I Play With Madness?” 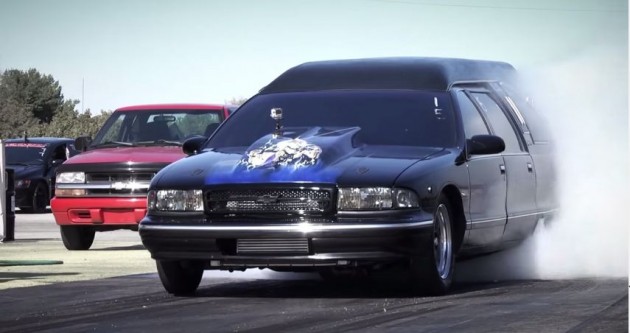 When the dust settled, Madness hit 137 mph for a 9.94 second quarter-mile, obliterating the previous record. That particular record was achieved back in April 2014, and so you just know that Toman has already fitted Madness with a new, 1,300-horsepower setup just in case anyone tries to step to his record.

While he hasn’t documented any runs with it yet, Toman stated that his goal is a 9.5-second quarter mile and, ultimately, a 200 mph run on an airport tarmac.

Arne Toman doesn’t have to ask if he can play with madness. He just does.