Chevy began delivering the Z06 to customers last week, so it wasn’t long before we stumbled on the very first 2015 Corvette Z06 burnout video online. (Watch below.) The video comes courtesy of Vengeance Racing, where the folks were so eager to hear this baby roar that they did their burnout right there in the parking lot. 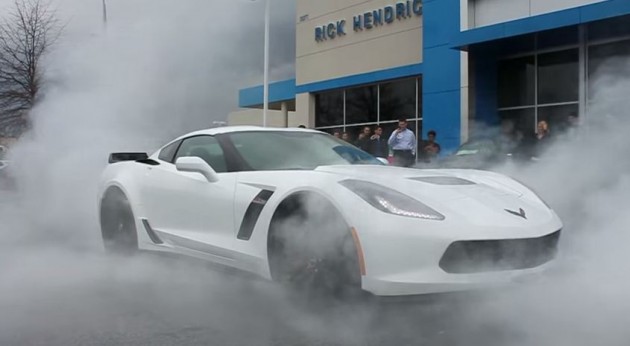 Check out the awesome 2015 Corvette Z06 burnout footage below.

The all-new 2015 Corvette Z06 is powered by an LT4 supercharged 6.2-liter V8 engine, which pumps out 650 horsepower and 650 lb-ft of torque. The engine is mated to a standard seven-speed manual gearbox, though drivers can opt for the paddle-shift eight-speed automatic transmission.

Related: 2015 Z06 Corvette Is Most Powerful Version Ever

The Z06 can sprint from 0 to 60 miles an hour in 2.95 seconds with the eight-speed and 3.2 seconds with the seven-speed. Despite all that power, the Z06 still manages 23 mpg on the highway.

But why read about it when you can see it in all its awesome burnout action? So, without further ado, the moment you’ve all been waiting for—the new 2015 Corvette Z06 burnout footage. Check it out below:

Related: The 2015 Euro Camaro Gets a First Glance