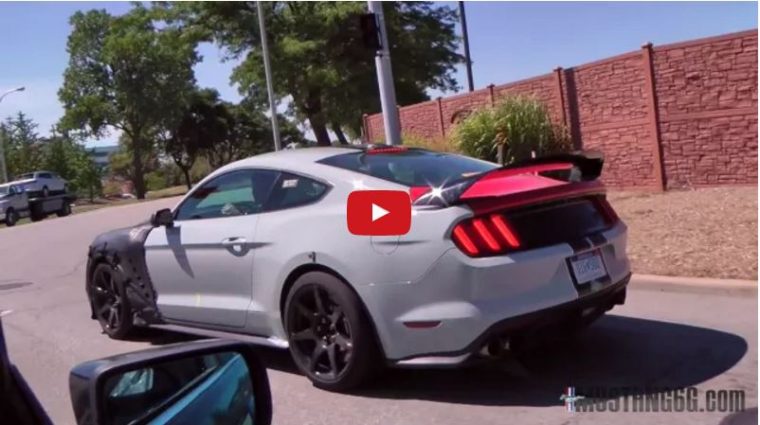 Chevrolet is busy playing up the awe-inspiring 640-horsepower performance of the 2017 Camaro ZL1, and Dodge seems to be toying with the idea of putting together a 750-horsepower Hellcat. It should come as little surprise, then, to learn that Ford is working on the Mustang to end all Mustangs: a new GT500 that might wind up with a max output of 800 horsepower.

The Mustang Supremacy: Ford’s pony outsells Camaro and Challenger in 2015

The fine folks at Mustang6G.com obtained a spy video and numerous photos of a Mustang prototype that could very well be the 2018-19 Shelby GT500. What we can see of it looks quite a bit like the 2017 Shelby GT350R, right down to the spoiler and the carbon fiber wheels.

The video, which you can experience below (and, yeah, it’s an experience), gives just a taste of what this mysterious Mustang sounds like. Thrill as it turns right around a corner and accelerates! Chill as it turns right again, only this time into the parking lot of Ford’s Dearborn Developmental Center. Call a friend over to watch with you and offer to share your seat, because you will both only need the edge.

As for the rumor mill, popular belief seems to be that the 2018 GT500 will receive a cross-plane version of the 5.2-liter “Voodoo” V8 that powers the 2016-17 Shelby GT350 and Shelby GT350R. Some sources seem to suggest that it will be boosted by a 2.6-liter Eaton supercharger, leading AutoWeek to project output of up to 750 horsepower, while some sources tell Autocar that the engine will be twin-turbocharged (as indicated by a “TT-0081” sticker on the windshield) for upwards of 800 horsepower. Jalopnik, meanwhile, predicts that the GT500 will be offered in AWD and have an output of 1,234 horsepower thanks to some combination of sawdust and jet fuel.

One thing upon which most sources seem to agree: the prototype seen in the video goes by the codename “Predator.” Whether it’s got a supercharger or a turbocharger or a megacharger, that’s badass.