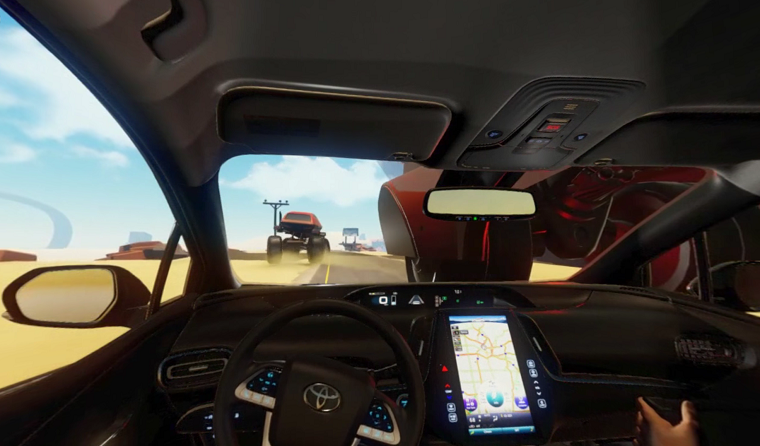 With virtual reality headsets like the Oculus Rift and HTC Vive finally on the market, it is now possible to experience virtual worlds in completely immersive, 360° environments. For now, the most enthusiastic consumers of these devices have been gamers, and simracing in particular has been a good match for the technology.

Big companies like Toyota, however, are already understanding that virtual reality devices provide a unique and compelling way to advertise products—especially cars. That’s why the Japanese automaker hired Syd Mead, the creative visionary behind the vehicles and architecture in Tron, Blade Runner, and Aliens to provide concept art and designs for Toyota’s VR Prius Prime demo at the TechCrunch Disrupt convention in San Francisco, where the industry’s key innovators go to introduce new technologies that change—or “disrupt”—the game.

Toyota’s demo kicks off with an immersive 3D painting environment not unlike Tilt Brush, followed by a “4D” virtual reality ride in a Toyota Prius Prime, in which the subject is seated in a physical driver’s seat and provided with the Prime’s actual steering wheel, then thrown into an animated world designed by Syd Mead himself, complete with picturesque landscapes and other cars.

The demo no doubt serves as a preview of what potential customer will be able to experience in the future. One can easily imagine that, one day, browsing for cars online will include the ability to “test-drive” them directly from one’s living rooms with a virtual reality headset. It will probably never live up to the real thing, but for some, it might just be the motivation they need to skip a trip to the dealership or to decide to head over for a real test drive.

Check out the video below for a preview of Toyota’s VR test drive in the Toyota Prius Prime. Remember, it was “shot” in 360°, so you can click and drag the mouse over the video screen to look around as it plays!

History Lesson: Did you know that Toyota started out as a textile manufacturer?