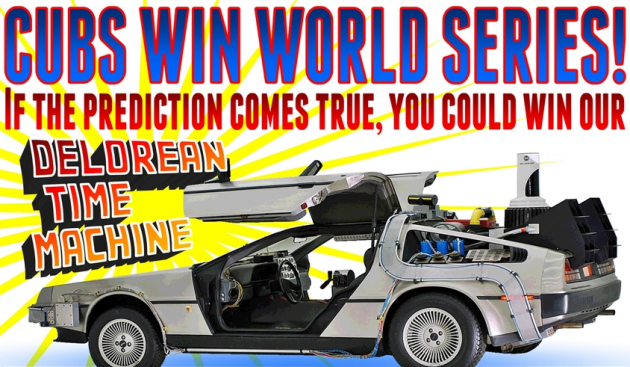 The clever publicity stunt is inspired by the famous moment in the 1989 comedy Back to the Future Part II, in which Marty McFly flies a time-traveling DeLorean to October 21, 2015, only to discover that the long-suffering Cubbies have finally won a title:

However, fans remain eternally optimistic for the 2015 season, which begins at Wrigley Field on the night of April 5th. After finishing last in their division in 2014, the Cubs have made enough changes that they’re considered a genuine contender this year. But the team also plays in the stacked NL Central, which makes going from “worst to first” all that more difficult.

Plus, c’mon… it’s the Cubs. Do you know what a Cubs fan does after his team wins the World Series? He turns off his PlayStation.

But, if you’re a true believer, you can become eligible for the DeLorean giveaway simply by visiting the Volo Museum, beginning March 21st and ending a day before the World Series starts. You can register online, or in person, when you visit.