Watch Out For Dinosaurs in Parking Garages 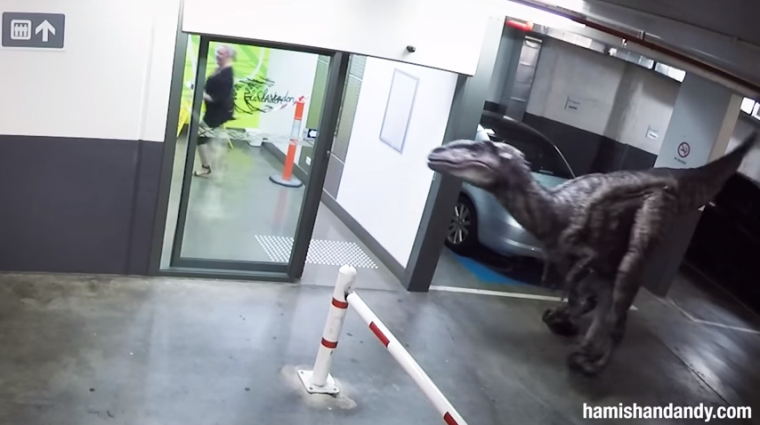 As a woman, I was always told to be cautious in dark parking lots or garages. When my well-meaning teachers and advisors told me about keeping my eyes peeled for anyone around me or my car acting suspicious, I don’t think any of them had a dinosaur in mind.

It Looks Like a Dinosaur: Check out the 2016 Nissan JUKE

Aussie pranksters Hamish & Andy managed to get their hands on one of the most expensive and realistic dinosaur suits on the market, and of course they had to use it to scare the bejesus out of their coworkers. The dinosaur lay in wait in a parking garage attached to the pair’s office, and they called unsuspecting coworkers down to the garage under the pretense of helping unload a packed car.

As each target left the walled-in area containing the elevators, the dinosaur would charge them. Some of the workers saw the dino as they came around the corner and were able to retreat to the safety of the elevator bay.  One of them was unaware of the puppet until it was between her and safety, forcing her to run from the creature.

Get Away Very Fast: Learn about the Nissan 370Z and plan your escape

Check out the dinosaur, which looks like a living beast, in the video of the prank below.

April Fools’ Day is fast approaching this Friday, so you have to be ready for your coworkers to pull a fast one on you. Save yourself, trust no one, and always be on alert.

If this story has you shaking in your boots, watch this more adorable T-Rex slipping and sliding on the ice to calm your nerves.