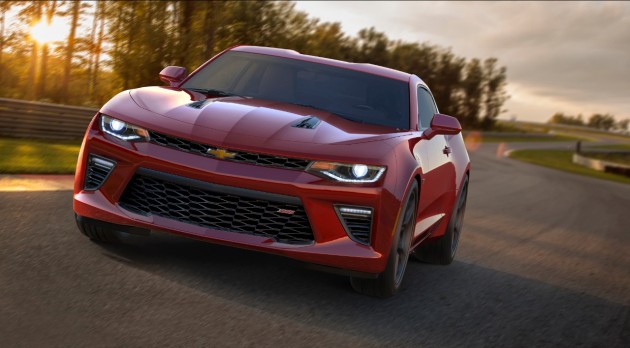 When the all-new sixth-generation 2016 Chevy Camaro debuted two weeks ago, we shared with you all of the pertinent details… even though you probably knew them all beforehand. The day prior to the big reveal, the Camaro’s look, engine options, and GM talking points were all leaked.

But despite that, we dutifully reported on the big reveal, and included a brief 90 second video that showed the new pony car’s actual unveiling.

“The Detroit spirit is ingrained in Chevrolet,” Reuss told a room full of Camaro enthusiasts and automotive journalists, who had gathered at Detroit’s Belle Isle Park for the event. “So I can think of no better place to reveal the new Camaro then right here in the Motor City.”

At around the three minute and thirty second mark, the Camaros come out and strut their stuff on the runway. The biggest applause, though, comes about three minutes later, when Reuss discusses the 455 horsepower 6.2-liter LT1 V8 engine option.

“I can say with complete confidence that it is one of the world’s best performance cars. Period.” says Reuss seconds after the now-Alpha-based Camaro takes the stage. “This car is far superior to any car in the sports car arena.”

Looks like a blast. If you feel like watching this video fails to capture the excitement of seeing the new 2016 Camaro live and in the sheetmetal, then maybe you should consider catching it when it goes on tour.