What do the Transformers Transform Into?: Part 2

Another examination of the Autobots and Decepticons and what they transform into.

What do more of the Transformers transform into?

Children of the ‘80s might remember Hot Rod as the punk who got Optimus Prime killed in the original Transformers animated movie. However, the second leader of the Autobots developed his own following  over time. This was probably due to being voiced by Breakfast Club bad boy Judd Nelson. His alternate form, the Dome Zero, probably helped increase his popularity too. What makes the car that Hot Rod transforms into so special is that it was never truly released! The sports car only existed as a prototype. 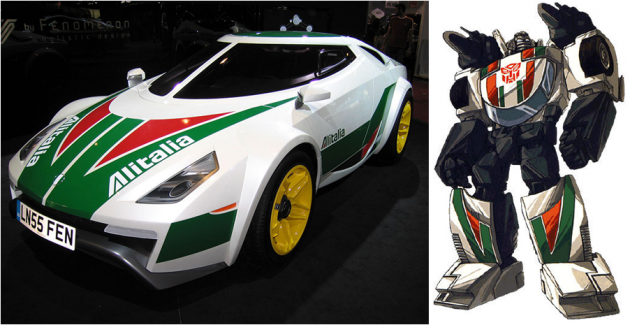 Wheeljack is the scientist on the Autobot team. Unfortunately for his comrades, he’s somewhat of a mad scientist! Wheeljack’s inventions have a tendency of ending in disaster. He even created the Dinobots, rebellious Transformers who turn into dinosaurs! When not working on his crazy experiments, Wheeljack was cruising around as the Lancia Stratos Italian sports car. 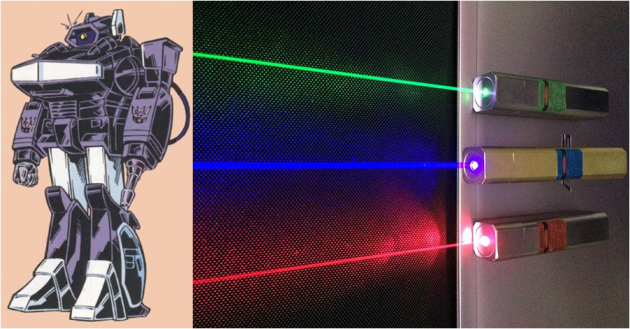 Equally as mad as Wheeljack but devoid of any heroic qualities, Shockwave serves as the lead scientist for the Decepticons. While his evil allies travelled to Earth, this one-eyed purple people hater stayed on the Tranformers planet of Cybertron. He much preferred it to our planet, which is probably why he never turned into an Earth vehicle. Instead, much in the same vein as Megatron, Shockwave transformed into a laser gun, which is admittedly more intimidating than a hand gun.

There are very few flying Autobots. Most Transformers who turn into planes are Decepticons. Jetfire was a member of the Decepticons once as well. However, this Transformers scientist defected to the Autobot side after realizing how cruel his old allies could be. Jetfire brings some aerial assistance to the Autobots by changing into the Lockheed SR-71 Blackbird, the fastest plane in the world!

Devastator might be one of the largest Transformers of all time. That’s because he’s actually six Transformers combined into one! Formed when a team of six Decepticons called the Constructicons combine, Devastator is able to cause some serious devastation. The robots that make up Devastator turn into a complete collection of various construction vehicles, and they are dangerous fighters in their own right. 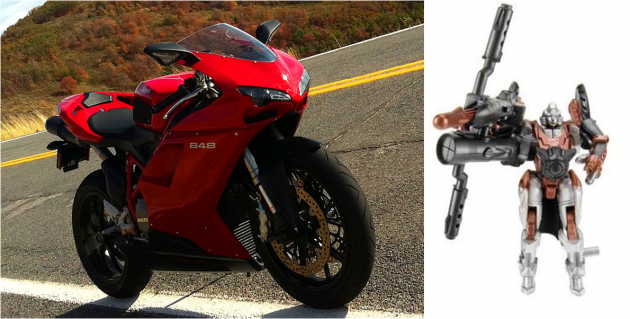 In a testosterone-fueled series like Transformers, Arcee has the distinction of being one of the few female characters. Unfortunately, the original series didn’t give her much of an identity outside of being a girl. Over time, the franchise has treated the character with more respect, and Arcee is now one of the fiercest and most determined of the Autobot warriors. Arcee has a tendency to transform into sleek, powerful motorcycles like the Ducati 848 and Kawasaki Ninja.

Lockdown is basically the Boba Fett of the Transformers franchise.  A ruthless bounty hunter who always gets his prize, Lockdown delights in torturing his prey. He served as the main antagonist in last year’s Transformers: Age of Extinction. This wicked villain got an equally wicked vehicle transformation in the form of the Lamborghini Aventador, one of the most sought after luxury sports cars on the market today. 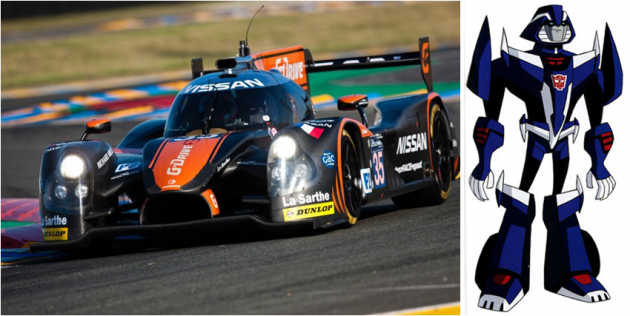 Mirage is not the most popular Autobot among his peers. This posh Transformer is quite aloof and removed. In fact, he’s so mysterious that his allies once thought he was a Decepticon spy! His reserved nature, coupled with his ability to turn invisible, make him perfect for recon missions. Transforming into a Ligier Formula One racecar helps Mirage speed away from trouble.

For when the Decepticons needed to get from Point A to Point B, they called upon Astrotrain. This massive Transformer had the uncanny ability to transform into not just one, but two vehicles. As his uninspired name suggests, Astrotrain could change into both a space shuttle and a train. Both of his forms were useful in transporting the Decepticons to their next mission.

Grimlock turns into a mechanical T-Rex. Nuff said! Grimlock is the leader of the Dinobots, a team of Autobots created by Wheeljack that can turn into dinosaurs. However, Grimlock’s not too good about taking orders from anyone, often putting him in conflict with the other Autobots. Nevertheless, when the going gets tough, Grimlock gets tougher and proceeds to kick some robot butt!