What do the Transformers Transform Into?

Discover what the heroic Autobots and villainous Decepticons change into when they transform.

What do the Transformers transform into?
Photo: Hasbro

No series quite captures the nostalgia of the 1980s like the Transformers. A tale of good vs. evil, the ongoing battles between these robots has captured the imagination of both children and adults for generations. One aspect that helps the Transformers remain so timeless is their ability to change into vehicles. As automobiles have changed since the ’80s, the Transformers have changed with them, adapting to popular vehicles at the time. The Autobots and Decpeticons turn into some of the coolest vehicles around. Here is a look at what the Transformers, well, transform into.

Optimus Prime, leader of the Autobots, represents all that is righteous and nostalgic about the 1980s. He’s such a paragon of justice that he’s even been resurrected Jesus-style several times! However, Optimus is also tough when he has to be. So a tough semi truck was chosen for his vehicle. In the ’80s, Optimus turned into a generic Freightliner cab over truck. When the 2007 film was released, a Peterbilt 379 was chosen, adding a nose to Optimus’ flat face and earning the ire of hardcore Transformers traditionalists.

Besides Optimus, Bumblebee is probably the most famous of the Transformers. He’s become the unofficial mascot of the series. Today, Bumblebee is known for his stylish Chevrolet Camaro form. However, Bumblebee originally turned into a much more modest Volkswagen Beetle. Instead of a sporty muscle car, Bumblebee transformed into Herbie the Love Bug!

If Optimus is the ultimate example of good, then Megatron is his evil antithesis. This leader of the Decepticons was not only cruel to his enemies, but to his minions as well. He also must have started out as a walking piece of gun-control propaganda, as he originally became a gun when he transformed. Later incarnations made his transformations more intimidating, with tanks and semi trucks, like the Mack Titan, which further cement his role as an evil Optimus.

The Decepticons had a trend of turning into weird, random objects in the ’80s. Megatron’s loyal soldier, Soundwave, turned into a cassette player, and later a boombox. As strange as this form was, it allowed Soundwave to call upon cassette tape minions. Since cassette players are pretty outdated, Soundwave now turns into a unmanned drone or satellite.

As loyal as Soundwave is to Megatron, that is how loyal Ironhide is to Optimus. This Autobot is the toughest in the group. However, his original vehicle didn’t quite reflect his ruggedness. Ironhide first turned into a Nissan C20 Vanette, which was more suited to taking kids to soccer practice than fighting the forces of evil! When the new movie came out, Ironhide received an upgrade, turning into GMC Topkick C4500. You have to hand it to Michael Bay, he knows tough vehicles! 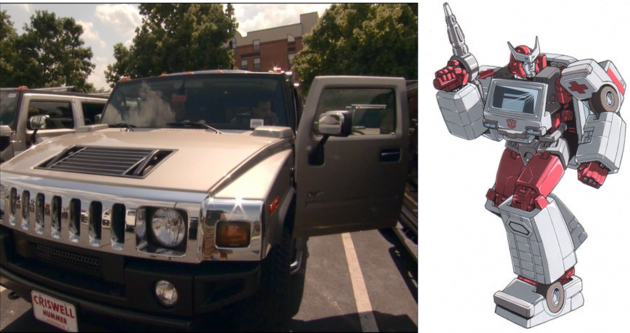 With all the fighting that goes on in the Transformers, they need to be constantly patched up. Enter Ratchet, the Autobot’s medic. Or would it be their mechanic? Ratchet originally shared the same vehicle as Ironhide, a Nissan C20 Vanette, only as an ambulance instead of a van. Ratchet also received an upgrade in 2007’s Transformers, this time turning into a Search and Rescue Hummer H2.

Starscream is Megatron’s treacherous and cowardly second-in-command. His intelligence and his state-of-the-art vehicle forms help him get away with his scheming. In 1984, he turned into the F-15 Eagle, one of the most advanced fighter jets at the time. To keep up with technology, Starscream transforms into the Lockheed Martin F-22 Raptor in the live action adaptations.

Rash and headstrong, Sideswipe is an Autobot who likes to bend the rules and test the limits. He’s also one of the fastest Autobots, transforming into some of the coolest cars ever assembled. In the 1980s, Sideswipe turned into the iconic Lamborghini Countach performance vehicle. Since Chevrolet had such a big investment in the live action Transformers movies, Sideswipe traded his Countach form for an equally stylish Chevrolet Corvette Stingray.

Another Autobot who understands style is Jazz. With a name like that, you know he’s going to turn into some sweet cars! He originally raced ahead of the competition as a Porsche 935 racing vehicle. During the 2007 live action film, Jazz turned into the Pontiac Solstice sports car. Everything Jazz does, he does with style!

Barricade is the quintessential version of “bad cop.” He even has the phrase “To punish and enslave…” placed on his vehicle! This Decepticon villain deceived the human populace in 2007’s Transformers by disguising himself as a police cruiser. Serving as a rival of sorts for Bumblebee in the film, it’s only appropriate that Barricade transformed into a Saleen S281, a modified version of the Ford Mustang, the Camaro’s rival.