Why on Earth Would You Steal Pavement? 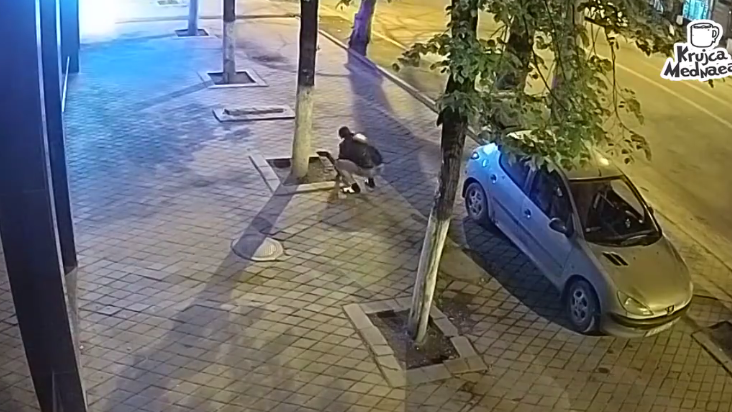 How can you tell if things are going badly in your country? Well, if you live in Eastern European country of Moldova, you could have just gone into the main street of capital city Chisinau the other night, where you would have seen some guy literally stealing the parts of the sidewalk.

The theft was captured on CCTV cameras and then posted to a popular Moldovan Facebook page by a group called Krujca Mednaea. Oh, and somewhere along the line, someone saw a parallel with the bricks and dubbed the video over with the Super Mario soundtrack, complete with coin sounds, a level up when the car changed places, and game over noise when the robbers drive away.

As funny as that video is, obviously this does not reflect well on Moldova, and the people know it. The video went viral, with over 388,000 views at time of writing, and quite a few very angry commenters. Many seemed to think that the incident is emblematic of the turmoil currently facing the country, as anti-government protests wrack the nation, and back in 2014, a billion dollars went missing from three Moldovan banks.

One commenter wrote, “Everyone is stealing what they can, some are stealing billions, others the pavement.”

In brighter news, the roadway robber has reportedly been caught, and is facing a fine of 2,000 lei (or about $100) if convicted. However, infuriatingly, we don’t know what he was stealing those paving stones for. Was he building a nice backyard patio and ran out of funds? Do he and his getaway driver buddy run a black market for masonry? Or are they trying to get creative to keep their little hatchback on the ground at higher speeds?

Sadly, we may never know.