Why You Shouldn’t Rage on the Road: Exhibit A

There are few impulses that are worse to act upon than those that accompany road rage. Don’t believe us? Then you’d probably do well to check out the video below:

As if the title “Guy was looking for a fight and got what he deserved” isn’t telling enough, here’s a brief synopsis. From where the video picks up—somewhere on a stretch of road in an Eastern European country—our dash-cam-carrying hero is cut off by a Renault Logan, the driver of which immediately pumps the brakes and comes to a complete stop.

The door swings open, and from the vehicle an extremely angry bald man emerges. This man is, by no means, a “Stone Cold” Steve Austin-esque figure, but he’s clearly ready to do his level best to stomp a mudhole in someone and walk it dry. 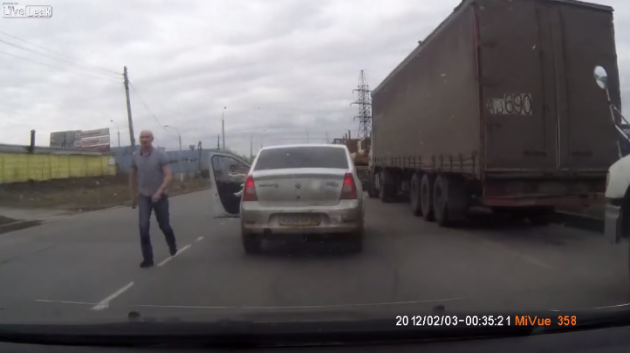 Our hero driver, not one to give in to silly impulses, has a significantly better idea than the driver of the Logan: he doesn’t engage in fisticuffs, opting instead to drive away and avoid a physical confrontation.

But not before he plows into the other vehicle’s driver’s side door, which the raging driver has left ajar.