Win a Harley-Davidson Motorcycle, the Newest Member of The Avengers 2: Age of Ultron

Apparently, Hawkeye and Black Widow have been replaced by a motorcycle–or that’s their black leather-clad love child

Come May, we’re going to see promotional tie-ins for The Avengers 2: Age of Ultron out the wazoo–probably the Hulk’s wazoo, no less. It’s only March and the first tie-in has already launched.

This one is actually worth your time.

In the first Marvel’s The Avengers film three years ago, Captain America rode a black 2012 Softail Slim motorcycle. The promotional tie-in contest, “Assemble Your Freedom,” allowed a special winner to be written into an Avengers comic book.

This year for the sequel, the stakes are even higher. Harley-Davidson and Marvel Studios have teamed up again with the The Avengers 2: Age of Ultron Sweepstakes. The grand prize for this contest is a brand-new, customized Harley-Davidson Street 750 Motorcycle.

Check out the directions for applying below!

Related: Where can you see some of the coolest motorcycle stunts ever filmed?

Win the Motorcycle Featured in The Avengers 2: Age of Ultron 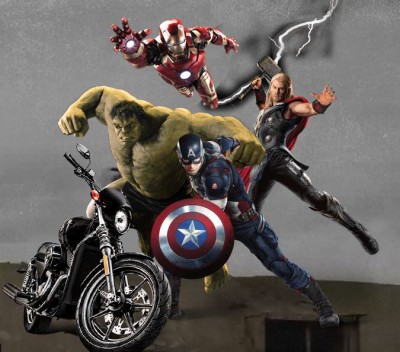 If the Harley-Davidson Street 750 sounds familiar, it’s because that’s the motorcycle heavily showcased in Captain America: The Winter Soldier.

At the 2014 San Diego Comic-Con, Harley-Davidson announced its plans to partner with Marvel Studios to promote the brand’s first electric motorcycle, Project LiveWire. The bike will be ridden by Black Widow (Scarlett Johansson) in The Avengers 2: Age of Ultron.

“Our partnership with Marvel continues to provide thrilling platforms to showcase our latest innovations to existing and new fans of the brand,” said Dino Bernacchi, Director of US Marketing at Harley-Davidson Motor Company. “Not one, but two bikes will be featured in Avengers: Age of Ultron-Project LiveWire and the all-new Street 750, which is now available at Harley-Davidson dealerships.”

While Project Livewire isn’t being offered to customers just yet, you can get your hands on a unique Street 750.

Instructions: Enter the official sweepstakes by filling out the entry form here. The detailed form includes your full name, address, age, gender, ethnicity, military experience (if any), and motorcycle-pertinent information–including license possession, bike ownership, and riding experience. Each person can enter only once. No purchase is necessary.

Picking a Winner: A random drawing of all eligible applicants will be held around June 15th and the winner will be notified around June 22nd.

Related: This motorcycle-themed road trip HAS to be one of the worst movies ever

Prize Details: The grand prize is a Harley-Davidson Street 750 Motorcycle with custom paint (valued at $8,500), a VIP Stunt Rider Experience (priceless, obviously), and a $500 credit toward Harley-Davidson® Riding Academy school tuition. The motorcycle will be delivered to the Harley retailer closest to the winner.

Restrictions: Entrants must be at least 18 years old and be a resident within the 50 United States or Washington DC. The winner must show proof of insurance and a valid license to accept the prize.

Even if you don’t think you’ll win the contest, or aren’t interested in the prize, it’s still worth applying. Why? The first 150,000 applicants will receive a special sticker in the mail!

The contest ends on May 15, 2015, so fill out that application…and don’t forget to see the new flick when it arrives May 1st!