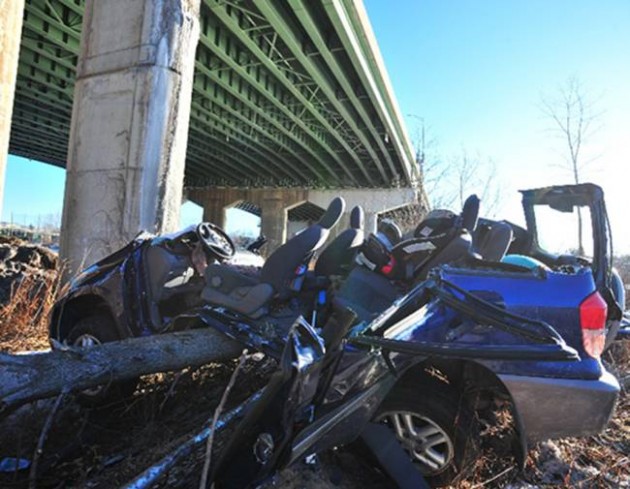 The remains of the Toyota RAV4
Photo: New Jersey Record

Winter brings out the worst in many drivers. From those who seem to be oblivious to the fact that there’s snow on the ground to those who think it’s necessary to drive 20 mph in half an inch of the white stuff, drivers seem to get even worse during the coldest months. When a New Jersey woman was cut off by some assbag while driving on the highway, she veered sideways and hit a snowbank, causing her Toyota RAV4 to fly 60 feet off a bridge. Somehow, she managed to emerge without serious injuries.

Elizabeth Wolfhoff and her passenger, Rebecca Winslo, no doubt were crapping their pants as the SUV careened through the air and straight off the bridge. But somehow, the RAV4 managed to land upright on top of a fence and tree underneath the Hackensack River bridge and missed the river itself entirely.

Although relatively uninjured, the two women were understandably scared. Firefighters who responded to the accident had to use the “jaws of life” to remove the two women from the vehicle. Once they had been rescued, both women were taken to a hospital after complaining of back and neck pain. One of the women will remain in hospital while she undergoes surgery.

As firefighter Michael Thomasey put it, “It’s just shocking that you could fall that far in a car and be awake when everybody gets there, telling us what hurts.” We’ll say!