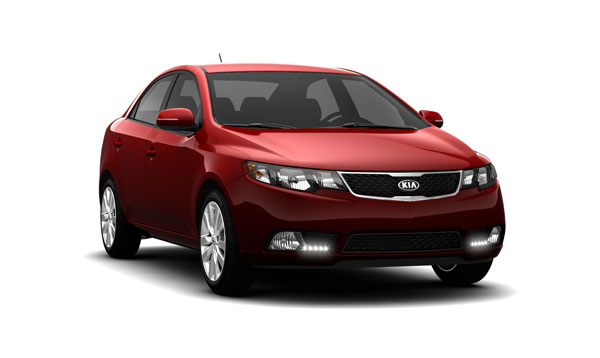 The 2013 Kia Forte is quieter than ever with additional acoustic insulation. There are also new available features offered, including LED running lights and power-folding mirrors.

More from Kia: 2015 Kia Sedona Will Change Your Mind about Minivans

While the majority of carmakers seem to focus on making their sedans more family-friendly than sporty, Kia seems to be taking the opposite route, introducing a sporty, yet family-friendly sedan option with the 2013 Kia Forte. Offered in a sedan, coupe, or hatchback body style, the Forte has simple, clean lines and a modern front grille that reminds people of the fact that sometimes less really is more.

The powertrain for the 2013 Kia Forte depends entirely on the model you choose. For the LX and EX, a 2.0-liter four-cylinder engine is the ticket, producing a decent 156 horsepower and 144 lb-ft of torque, just enough to add a bit of pep to your daily commute. A six-speed manual transmission is standard, while a six-speed automatic is optional.

The Forte SX has a 2.4-liter four-cylinder that has a bit more power, offering 173 hp and 168 lb-ft of torque. It also comes standard with a six-speed manual, though a six-speed automatic is once again offered as an option.

The sportiness of the Forte’s exterior continues on its interior with a modern center stack design enhancing the car’s athletic feel. Legroom in both the front and back seats are plentiful, though the coupe’s rear seat can be a bit tight, while cargo room is abundant, allowing up to 19.4 cubic feet of space in the hatchback, which expands even further when the seatbacks are folded down to make a flat floor.

According to government testing, the Forte sedan and hatchback both received four out of five stars for overall crashworthiness, while the Insurance Institute for Highway Safety gave the Forte sedan its highest possible rating of “Good” in the frontal-offset, side, and roof strength tests.