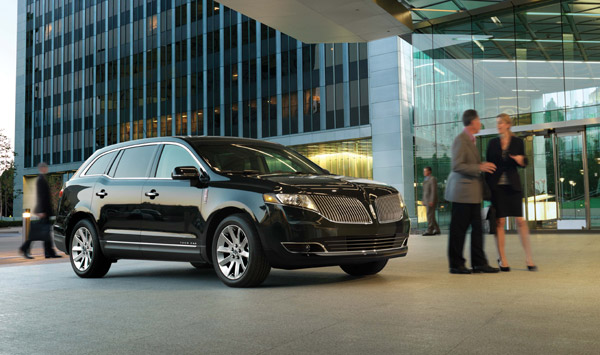 The 2013 Lincoln MKT gets a new front end, instrument panel, and improved handling.

The 2013 Lincoln MKT looks like it may have been pulled straight out of a concept show. In the front, the split-wing grille is clean, sharp, and more prominent than ever. Muscular bulges pop out on the sides of the vehicle’s high beltline, and a full-width taillamp with the brand’s logo closes out the rear.

The 2013 Lincoln MKT offers a naturally-aspirated 3.7-liter V6 and a smaller but more powerful twin-turbocharged 3.5-liter EcoBoost V6. The former has FWD and makes 303 horsepower and 278 pound-feet of torque, while the latter has AWD and makes 365 and 350, respectively. Both are mated to a six-speed automatic transmission with manual-shift mode. When equipped with the EcoBoost engine, the MKT can accelerate from zero to 60 mph in only 6.3 seconds, a quick time for the segment.

The 2013 Lincoln MKT is most memorable for its interior, which blends space, luxury, and versatility with ease. It’s available in six- or seven-passenger configurations, both of which offer handsome styling and upscale materials, rich color schemes, high-quality stitching and seams, and a host of nifty features—including an available refrigerator!

The 2013 Lincoln MKT comes standard with antilock disc brakes, traction and stability control, front seat side-impact airbags and side curtain airbags covering all three rows, a rearview camera, and rear parking sensors. It received four stars out of five for overall safety by the National Highway Traffic Safety Administration and a Top Safety Pick award from the Insurance Institute for Highway Safety.