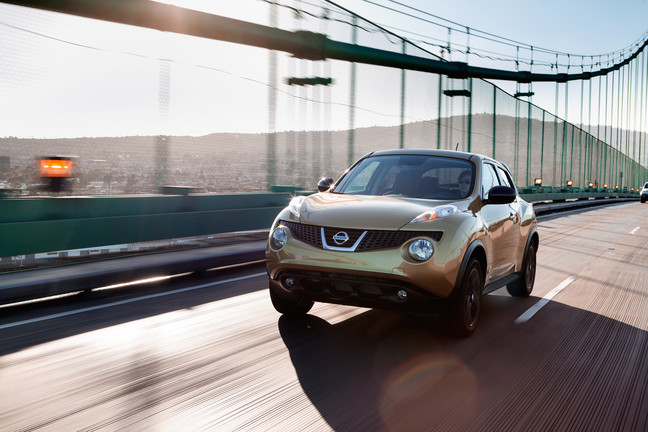 The 2013 Nissan JUKE gains a new NISMO edition with increased performance and several new advanced technologies on the SV and SL trims.

The 2013 Nissan JUKE is not your typical vehicle. You’ll either hate or love the exterior, but odds are that customers who like off-roaders injected with an enormous dose of flavor will fall in the latter camp. It’s got big-eyed bumper-mounted headlights, a low, squatting roofline, and color-keyed integrated rear door handles that overall give it an almost coupe-like appearance. Love it or hate it, there is no denying the JUKE will be turning heads.

The 2013 Nissan JUKE is powered by a 1.6-liter inline four-cylinder engine that produces 188 horsepower and 177 pound-feet of torque. It boasts direct fuel injection, turbocharging, and variable camshaft timing as well as a CVT automatic. It’s notable for its quick acceleration, precise steering, and sport-tuned suspension that all combined deliver much better handling than one might normally expect from this kind of vehicle.

The technology that makes the 2013 Nissan JUKE’s engine such a powerhouse also contribute to improving its efficiency. It delivers EPA-estimated 25 mpg city/31 mpg highway fuel economy with the standard FWD manual configuration, or 27/32 on the FWD automatic and 25/30 on the AWD automatic.

Organic curves and body-colored surfaces highlight an ambitious interior that should appeal to anyone that could get past—or fell in love with—the exterior of the 2013 Nissan JUKE. There isn’t much cargo space, but the seats are comfortable and supportive and the cabin features numerous thoughtful storage compartments. Standard equipment includes iPod connectivity, Bluetooth, keyless remote entry, and a multifunction steering wheel.

The 2013 Nissan JUKE comes standard with antilock disc brakes, stability and traction control, active front head restraints, front-seat side airbags, and side curtain airbags. It received four out of five stars for overall crash protection in government testing and the highest possible score of “Good” in frontal, side, and roof crash tests by the Insurance Institute for Highway Safety.

Related: The 2014 Nissan Maxima: Not Quite a Redesign, But More Refined Than Ever