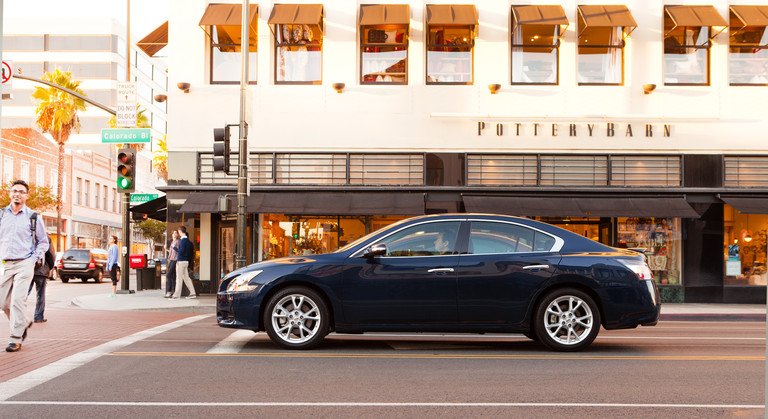 Nissan incorporated coupe-like design cues into the 2013 Nissan Maxima’s mid-size sedan body, which it describes as “liquid motion.” There’s definitely a bit of sportiness that can be found in the Maxima: the sleek hood, the bulging front fenders, the sculpted rear end, and especially the headlights and taillights, which are reminiscent of the Nissan 370Z sports coupe.

The 2013 Nissan Maxima comes standard with a 3.5-liter V6 that sends 290 horsepower and 261 pound-feet of torque to the front wheels via a continuously variable automatic transmission. It can accelerate from 0 to 60 mph in just 6.2 seconds, which is faster than nearly every entry-level luxury sedan equipped with a standard engine.

The 2013 Nissan Maxima’s interior is sleek and modern. The material quality is superb, the seats are supremely comfortable, and the user interface is quick and intuitive. Nissan said it wanted to make the cabin feel like an airplane cockpit, and—for the most part—it succeeded. The only downside is the limited headroom and legroom in the rear.

The 2013 Nissan Maxima comes standard with antilock disc brakes, stability and traction control, front-seat side-impact airbags, side curtain airbags and active front-seat head restraints. It received 4 out of 5 stars for Overall Vehicle Safety in government crash tests and received the highest score of “Good” in the IIH’s frontal-offset and side crash tests.