The 2013 GMC Sierra 1500 is still going strong as year-end clearance sales occur all over the country: it was just named the Highest Ranked Large Light Duty Pickup in Initial Quality (in a tie) by J.D. Power.  The 2014 model year is on the way, and the 2014 GMC Sierra 1500 was recently taken out for a test drive by the folks at Edmunds.  Their impression seems capable of being summed up in a simple word: wow. 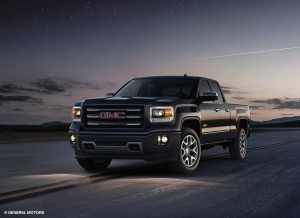 In the off-road test, Edmunds features manager Mike McGrath vaunted GMC’s expert tuning for providing the Sierra with the ability to instill confidence in the driver regardless of the surface.  McGrath goes on further to proclaim the Sierra 1500 “sturdy, secure, predictable and willing.”

Additionally, the 2014 Sierra is praised for its smooth, quiet ride, thanks due to the combination of triple door seals, shear body mounts, improved aerodynamics, valved exhaust system, and hydraulic powertain and body mounts.  Together, these upgrades reduce wind and engine noise and reduce vibrations, ensuring that the duly luxurious interior (which Edmunds calls an “Olympic triple-jump forward”) can be enjoyed with the kind of quiet reverence it deserves.

By test drive’s end, Edmunds proclaims that the 2014 Sierra is “better in every way than the truck it replaces and…better than just about every truck on the road today.”  Given that the 2014 GMC Sierra’s predecessor was the best in its class, that’s no faint praise.