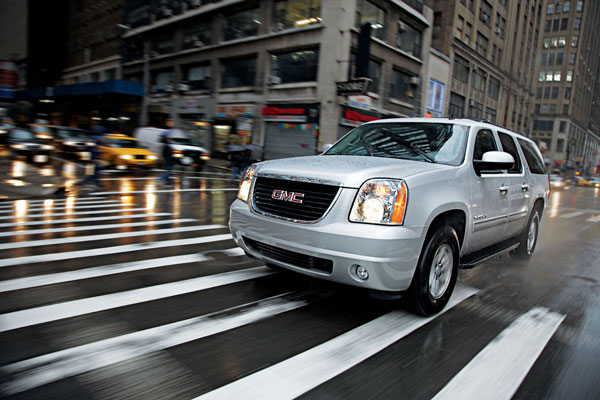 At first glance, there’s no denying that the GMC Yukon knows what it is to be an SUV. From its aggressive front façade to the pronounced, streamlined body, the 2014 Yukon presents an authoritative profile that commands attention. The wide stance hints not only at its capability as a utility vehicle, but also at the SUV’s towing ability. Add the square, cleanly styled rear with available power rear liftgate and you can’t deny that the 2014 Yukon has a bit of everything.

A 5.3-liter V8 powers both the 2014 Yukon SLE and SLT, churning out 320 horsepower and 335 lb-ft of torque. A standard six-speed automatic transmission comes with the choice of rear-wheel-drive or a four-wheel drive system. The Yukon Denali models get a 6.2-liter V8 that produces 403 horsepower and 417 lb-ft of torque. This powertrain includes a standard six-speed automatic with manual-shift capability and rear-wheel-drive. All-wheel-drive is optional.

There’s no denying that the 2014 Yukon is a premium-badged SUV with high-quality cabin materials and wide, comfortable front seats and second-row captain’s chairs. As one of the largest vehicles in the market, the 2014 Yukon gives everyone plenty of space to stretch out, making it a great vehicle for large families.

Government crash testing has rated the 2014 GMC Yukon an overall rating of four stars out of a possible five. Antilock brakes, stability control, front-seat side airbags, side curtain airbags, and OnStar emergency telematics all come as standard safety features for the Yukon, along with rear parking sensors and a rearview camera. A blind-sport warning system is standard on the Denali and optional on the SLT.