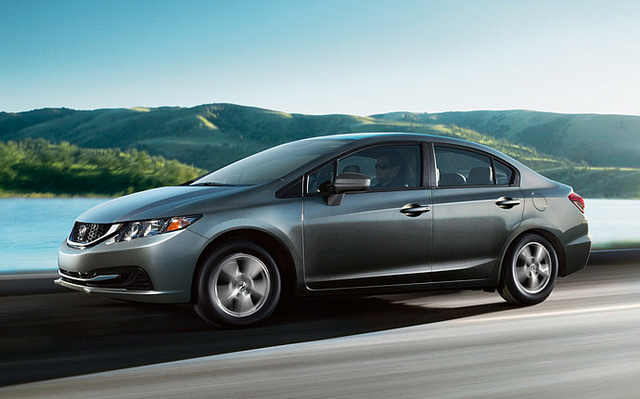 To match the forward-thinking technology that runs the 2014 Civic Natural Gas sedan, Honda has created a modernized exterior look that appeals to those looking to save a bit at the gas pump, while still staying true to the typical Civic look. One of the biggest exterior changes that allows you to boast about your green-friendly new vehicle is the unique Natural Gas badging, which sets this Civic apart from the rest of Honda’s lineup.

A 1.8-liter four-cylinder engine that is powered by natural gas gets the Civic Natural Gas to go, producing 110 horsepower and 106 lb-ft of torque. A five-speed automatic comes standard on this Civic model, sending power to the front wheels.

EPA-estimated fuel economy for the 2014 Civic Natural Gas is the gasoline equivalent of 31 mpg combined.

Technology is key in the Natural Gas’s interior, with a 7-inch audio display offering an interface that functions like a smartphone and an intuitive menu that provides you with the ability to access your phone, info, audio, or HondaLink settings. Bluetooth HandsFreeLink enhances this technology even more, allowing you to access your cell phone without taking your eyes off the road, while also playing music from your phone. While leg- and headroom is competitive, both in the front and back seats, the cargo space in the trunk is severely limited due to the large fuel tank needed for the natural gas system.

Standard safety features for the 2014 Honda Civic Natural Gas include antilock brakes, stability control, front side airbags, side curtain airbags, and a rearview camera. While the Civic Natural Gas model has not been government tested, the traditionally powered Civic sedan received a five out of five star overall rating for crashworthiness.