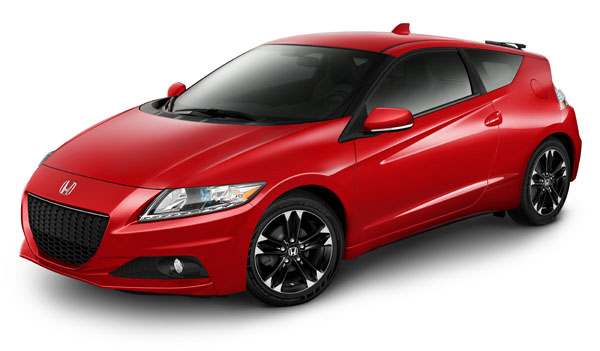 With chiseled lines that look like they were chipped from marble and an aggressive front end, the 2014 Honda CR-Z puts a dramatic face on the hybrid car industry. A modernized, streamlined front façade, featuring a fierce-looking grille, makes a strong first impression, leading to a sharply angled hatchback to complete the futuristic look and add some aerodynamics to the mix.

A hybrid system powers the 2014 CR-Z, combining a 1.5-liter four-cylinder engine with an electric motor capable of putting out 130 horsepower and 140 lb-ft of torque with the standard six-speed manual transmission. With the optional continuously variable transmission (CVT), the torque number drops to 127 lb-ft. While driving, the driver can choose from three different driving modes—Normal, Econ, or Sport. These modes change the parameters for a variety functions, such as gas-pedal sensitivity and steering effort level, among others. 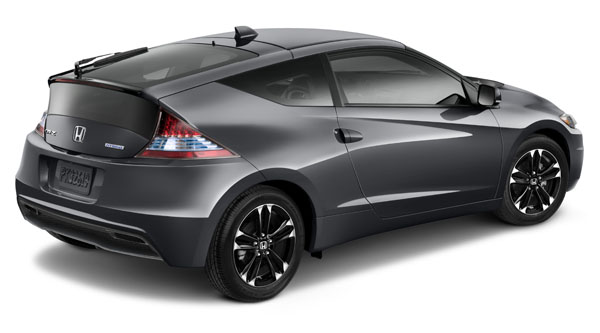 A large digital speedometer and analog tachometer come together to create an extremely distinctive dash design that adds to the sportiness of the car’s interior. Add the background lights that change color depending on the driving style efficiency, and there’s a decidedly futuristic feel in the 2014 CR-Z’s cabin. In order to be a bit unique, rather than having a rear seat, the CR-Z instead has a rear parcel shelf, making it a two-seater rather than a five. The front seat is supportive and roomy, providing the two passengers with plenty of comfort.

Government crash tests have found the CR-Z to be worthy of four out of a possible five star overall rating in safety, while the Insurance Institute for Highway Safety gave the CR-Z the highest rating of “Good” in its moderate-overlap frontal-offset, side-impact, and roof strength tests. Standard safety features include antilock brakes, stability and traction control, front seat side-impact airbags, side curtain airbags, and active head restraints. The EX models equipped with the navigation system also have a rearview camera.