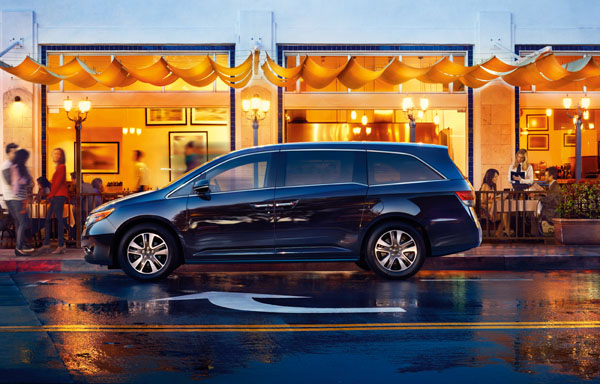 What’s New for the 2014 Honda Odyssey

It is no redesign, but there are some noticeable updates to the Honda Odyssey for 2014. New sheet metal gives the Odyssey’s exterior a refresh, and Honda has loaded its flagship minivan with new standard and available features, including Bluetooth audio, HD radio, a Pandora internet radio interface, and an in-vehicle vacuum cleaner.

The 2014 Honda Odyssey is a family-hauling minivan with seating for up to eight, and it looks the part, especially if your family has an active lifestyle. Aerodynamic lines run throughout and a bold, three-bar front grille to deliver an imposing on-road presence. Standard 17-inch steel wheels help create an athletic stance.

Every 2014 Honda Odyssey is powered by a 3.5-liter V6 that generates 248 horsepower and 250 lb-ft of torque. Those notable performance figures allow the Odyssey to travel from 0-60 mph in less than eight seconds and tow up to 3,500 pounds.

Despite impressive marks in terms of performance and capability, the 2014 Honda Odyssey’s versatile V6 still manages to return 19 mpg city and 28 mpg highway.

The three-row interior of the 2014 Honda Odyssey is among the most easy to manage in the industry, and its rear 60/40 split folds easily into the floor, creating level storage space. Regardless of the row you are sitting in, Honda has loaded the Odyssey with available technology so no one is bored, including a rear-seat entertainment system, a 12-speaker surround sound system, a voice-operated navigation system, HondaLink smartphone app integration, and Bluetooth connectivity.

Standard safety features on the 2014 Honda Odyssey include a rearview camera, traction and stability control, antilock disc brakes, and a comprehensive suite of airbags

Brought to you by Jim Sigel Automotive in Grants Pass, OR