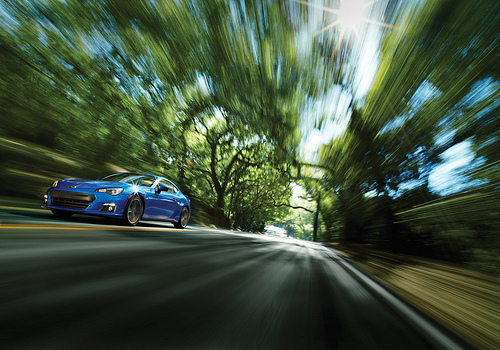 There are no new changes for the 2014 Subaru BRZ with the exception of a new standard smartphone integration system.

Smooth lines and abundant curves create an eye-catching body for the 2014 Subaru BRZ that you just can’t ignore. The uniquely styled headlights, which look a bit like snake eyes, combine with a simple, but sporty front façade to create a great first impression. Add the choice of either a coupe or convertible body, and you just can’t go wrong with the BRZ.

A 2.0-liter four-cylinder engine powers the 2014 BRZ, producing 200 horsepower and 151 lb-ft of torque. A six-speed manual transmission and rear-wheel drive are standard, though a six-speed automatic with shift paddles is optional.

While the interior of the 2014 BRZ isn’t the most lavish, its simple, clean design has an appeal all its own. An easy-to-read dashboard makes gathering information simple when you’re driving at top speeds, while the 6.1-inch touch screen comes standard with a GPS navigation system. The backseat is a bit tight when it comes to room, making it difficult to fit adult passengers, but the front seats provide the ultimate comfort.

According to the Insurance Institute of Highway Safety, the BRZ is worthy of their highest possible rating of “Good” in the moderate-overlap frontal-offset, side-impact, and roof strength tests. Standard safety equipment includes antilock brakes, stability and traction control, front side airbags, and side curtain airbags.