Lincoln is looking to jump start its brand name and has found the perfect way to do it— the 2015 Lincoln MKC. A premium small crossover, the MKC might be the shock to the system the Ford Motor Co. brand is looking for to reinvigorate its luxury label. 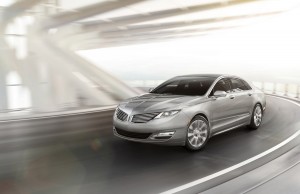 Similar to the MKC concept that was introduced to the industry last January in Detroit, the production model is the second of four vehicles Lincoln promised by 2016 for the brand’s “reinvention,” following the recently redesigned Lincoln MKZ midsize sedan that helped to increase Lincoln’s sales by 30% in October. The carmaker hopes to boost sales even more in the future by entering the small crossover segment.

“As a challenger luxury brand, entering this segment is a natural next step for us,” said Jim Farley, Ford global marketing head. “MKC will do more than just compete—it will change the way people thinking about Lincoln.

While pricing has yet to be announced, the 2015 Lincoln MKC is expected to arrive at dealerships sometime next summer. For more information, stay tuned to The News Wheel!