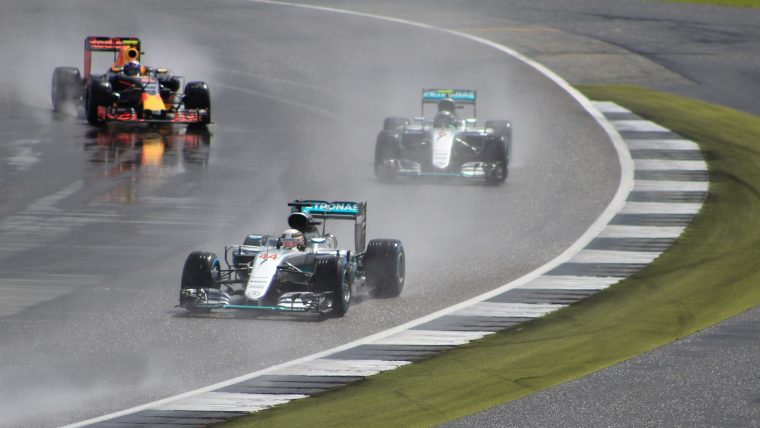 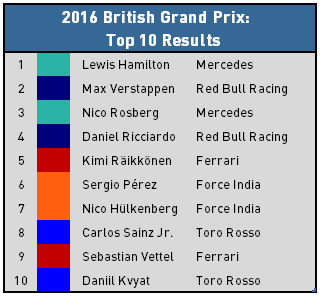 Last week, I mentioned that Lewis Hamilton might explode if he lost the 2016 British Grand Prix to Nico Rosberg. I should add that I never really believed he would finish anywhere but at the top of the podium short of a mechanical issue preventing it from happening, as the Brit is always extremely adamant about winning his home Grand Prix and he does, after all, have the best car on the grid. If that wasn’t enough, he’s excellent in the rain—so when I saw that it was raining on Sunday in Silverstone, I understood that only an act of god could get in his way of a win.

Aside from the fact that the Triple World Champion was indeed untouchable, the rain did make things interesting overall by making the beginning of the race a lot more chaotic than it would have been otherwise. In addition, Max Verstappen once again impressed, the British crowd proved it wasn’t as special as the British broadcast would have liked you to believe, and the asinine radio rules struck once again.

But as always, let’s start with qualifying. 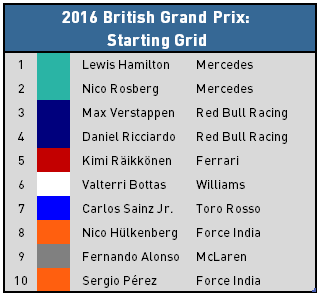 I didn’t expect anything but a Hamilton pole in Silverstone and the man delivered, even after his first pole-setting hot lap was disqualified. The stewards were quite strict about discounting any lap that a driver set by going outside the track limits on the exits of three specific corners, where doing so could give them an advantage. If all four wheels were just an inch off the track, they could say goodbye to their time—and I have to admit I rather liked it, because when it’s okay to ignore track limits, hot laps become a game of “who can corner cut or extend the furthest?”

But even after Hamilton’s first lap in the final qualifying session was removed, giving Rosberg the provisional pole, he simply put in another fast lap despite the pressure—this time a legal one—and earned himself the cheer of the crowd.

Red Bull locked down the second row on the grid, making it painfully obvious that Ferrari was not the best team after Mercedes as Team Principal Maurizio Arrivabene suggested in the press conference earlier that weekend. To make matters worse, Vettel had to yet again change his brand-new gearbox and take another five-place grid penalty, knocking him down to 11th on the starting grid.

Slicks and water do not get along well.

The race started in the wet and as is always the case when the weather makes things harder for the drivers, it was to the benefit of the spectators (at least the ones sitting comfortably at home in front of the TV). Still, I do have an issue with how the FIA now handles rainy race days.

When the teams head to a Grand Prix, they bring hundreds of tires with them, including the blue-marked “wet” tires designed for very rainy days when there is standing water on the track. At full speed, these tires can disperse up to 17 gallons or 65 liters of water per second. Yet lately, whenever a race is that wet, the race is simply delayed until it begins to dry, and then started under the safety car until it dries some more, so that by the time the race finally starts the full wet tires are no longer needed.

Point in fact, when the safety car finally returned to the pits at the end of the 5th lap to mark the true start of the 2016 British Grand Prix, nearly every driver followed suit and switched to the intermediates.

Still, they didn’t have an easy time out there. Some corners were wetter than others, such as the fast Turn 1, where numerous drivers were caught by surprise oversteer. Many of them lost control and went off-track: Sebastian Vettel spun, Fernando Alonso ate gravel and recovered, Rio Haryanto also ate gravel but didn’t recover, and many more had their moments—some leading in retirements.

The water even made the wheel to wheel racing a bit more interesting. Both Sergio Pérez and Nico Hülkenberg put in absolutely spirited drives and Alonso was also looking impressive before his spin. But the best fight was out in front.

Once again, as we saw in Monaco, Rosberg wasn’t nearly as comfortable in the rain as his teammate. Verstappen, on the other hand, seemed to have learned a thing or two from his father, who was notoriously good in wet conditions. As Hamilton sped off, Rosberg struggled to maintain a gap to the young 18-year-old behind him. After a scruffy lap and a bad entry into Turn 12, Verstappen went around him on the outside of Turn 13 and took second place. What’s more impressive than the fact that a Red Bull passed a Mercedes on-track is that you almost never see anyone overtake at that section of the track in the dry, much less in the wet.

The race wasn’t over though, and once the track had dried enough for the drivers to switch to slicks, Rosberg was back on the charge. Despite some brilliant defending, the Mercedes finally proved too much for Verstappen to handle and the championship leader regained second place…for a time.

With just a few laps to go, Rosberg’s transmission suddenly remained stuck in seventh gear, causing him to lose a significant chunk of time. His race engineer urgently told him what settings to change on his steering wheel to fix it and advised him to avoid the gear by shifting through it. Thanks to this, Rosberg managed to narrowly maintain his position—until the FIA decided it didn’t like what it had heard and slapped him with a 10-second penalty after the race, knocking him down to third.

If you’ve read my recap of the European Grand Prix, you already know that I think the radio ban is asinine for disallowing engineers to tell their drivers what to do in situations like these. Still, the FIA’s decision gave the teams valuable insight: in the future, when faced between a possible retirement or a 10-second penalty, we all know which they will choose. 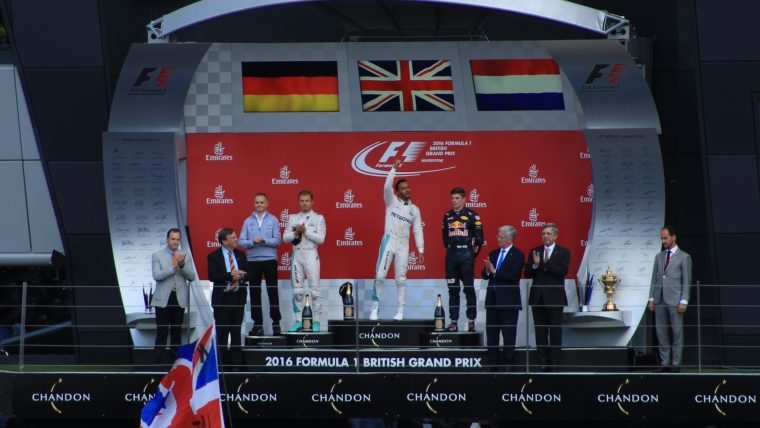 After listening to the British broadcast go on all weekend long about how the Brits were truly the best and most knowledgeable Formula 1 fans in the whole world, the podium ceremony served as an embarrassing lesson to the contrary. Rosberg was booed more loudly than anyone I’d ever heard—including Vettel in 2013—even despite a very gracious and subtle attempt by Hamilton to get them to stop.

They did cheer plenty for their man, though, and Hamilton did have everything to be happy about. Thanks to Rosberg’s penalty, the gap to the championship lead is now reduced to a single point, down from 43 just a few races ago.

Hamilton is likely to take a few penalties in the future because he is already on his last permitted engine of the season, but so far it is looking good for the Triple World Champion. 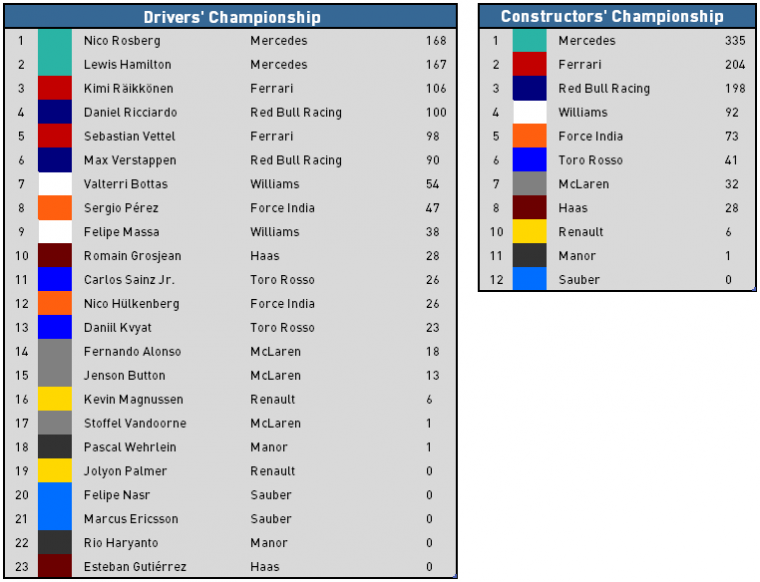