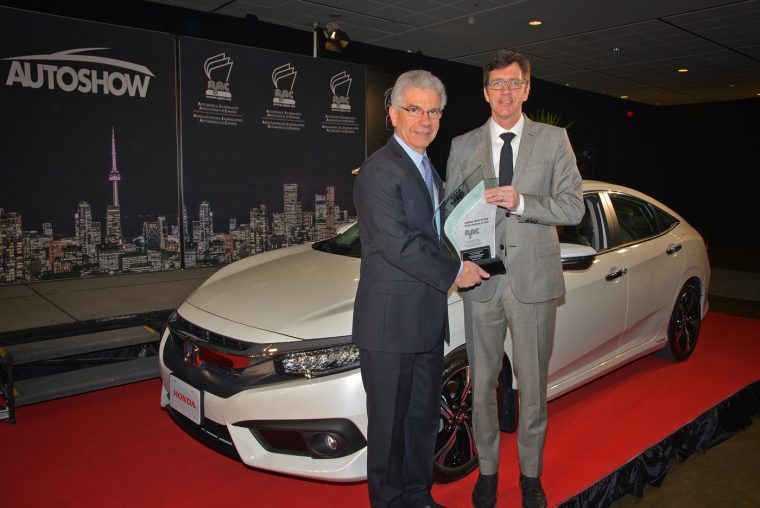 After being selected as one of three finalists at last month’s Montreal International Auto Show, the redesigned tenth-generation 2016 Honda Civic has won the prestigious Canadian Car of the Year award. The selection was made by the Automobile Journalists Association of Canada (AJAC), and presented today at the Canadian International Auto Show in Toronto.

Though Honda is a Japanese automaker, the Civic has legitimate Canadian bona fides, including the fact that it is built at the company’s manufacturing facility in Alliston, Ontario, which acts as the global lead plant for Civic production. Since 1988, over 4.5 million Civics have been built at the facility.

Additionally, the popular compact car has remained the country’s best-selling car for 18 consecutive years and counting.

“On behalf of the thousands of Honda associates across the country including the more than 4000 at our HCM [Honda of Canada Manufacturing] facility who lead global production of the tenth-generation Civic, I’d like to thank AJAC for this award,” said Jerry Chenkin, President of Honda Canada Inc. “The all-new Civic is the most innovative, ambitious and advanced iteration Honda has ever produced, setting a new benchmark in the compact car segment and we’re both elated and humbled that AJAC has recognized this achievement.”

The all-new, redesigned 2016 Civic took home similar honors earlier this year at the North American International Auto Show in Detroit, where it was named the 2016 North American Car of the Year by a group of 53 international automotive journalists from the US and Canada.