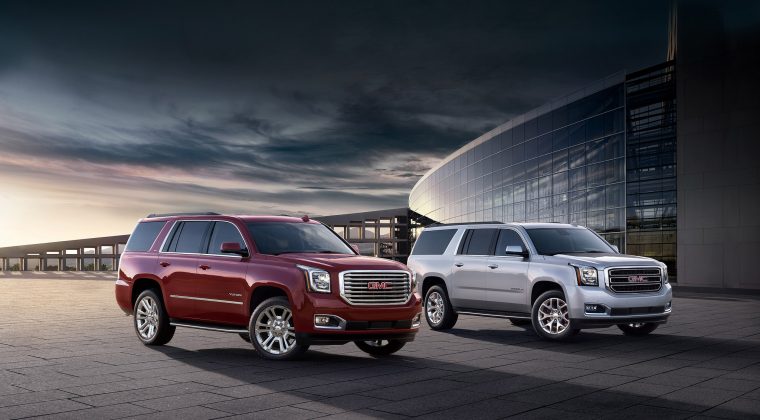 The 2017 GMC Yukon is a full-size, eight-passenger SUV that is a cut above the competition when it comes to luxury, even before upgrading to the truly extravagant Denali trim. No other vehicle in its class can rival its premium interior features and cutting-edge styling. The downside of being such a big and extravagant SUV is that the GMC Yukon’s efficiency suffers as a result, as does its value—especially as you pile on the options.

The 2017 GMC Yukon is available in three trim levels: SLE, SLT, and Denali. It is also available as a longer, XL model.

It’s hard not to notice the 2017 GMC Yukon. Big, in-your-face, brawny styling ensures that no one can miss you coming to the party. At the same time, the sculpted headlights and various chrome elements help give the GMC Yukon a more upscale look, especially on the Denali trim, which gets a special chrome mesh grille to stand out even more.

Exterior available on SLT (adds to or replaces features on SLE):

Exterior available on Denali (adds to or replaces features on SLT):

The 2017 GMC Yukon offers its customers nothing short of eight cylinders right out of the box. A 5.3-liter V8 that makes 355 horsepower and 383 lb-ft of torque is standard and mated to a six-speed automatic transmission. Upgrading to the Denali trim gets you an even heftier 6.2-liter V8 that cranks out 420 horsepower and 460 lb-ft of torque, which allows for a maximum towing capacity of 8,400 pounds. The Denali also comes standard with clever Magnetic Ride Control suspension that makes the ride quality even more pristine.

All GMC Yukon models are standard with two-wheel drive (2WD) and available with four-wheel drive (4WD), should drivers feel up for the occasional off-road excursion.

Though the 2017 GMC Yukon uses direct gasoline injection and Active Cylinder Management—which deactivates half the cylinders while cruising at steady speeds—to increase fuel economy, there’s only so much you can do to make a massive V8 engine efficient. According to the EPA, the base 5.3-liter gets 16/23/19 mpg city/highway/combined with 2WD and 16/22/18 mpg with 4WD. Meanwhile, the 6.2-liter gets 15/22/17 mpg with 2WD and 15/20/17 mpg with 4WD.

The 2017 GMC Yukon’s massive size pays off inside, where up to eight passengers can sit at ease. Additionally, the SUV’s abundant use of soft-touch materials and leather trim, as well as its overall artful design, easily makes it the most luxurious SUV in its segment. The attention to detail is superb, the controls easy to use, and the entertainment and convenience technologies seem to be endless, especially on the Denali trim. If interior luxury is the most important factor in your purchase decision, you can’t go wrong with the GMC Yukon.

Interior available on SLT (adds to or replaces features on SLE):

Interior available on Denali (adds to or replaces features on SLT):

You’re already going to be safer in the 2017 GMC Yukon simply by virtue of its size, but it helps to have a little extra. The SUV comes equipped with standard anti-lock disc brakes, stability control, traction control, front and rear parking sensors, a rearview camera, front-seat side airbags, a center airbag between the front bucket seats, and full-length side curtain airbags. OnStar is also standard, which includes roadside assistance, remote door unlocking, turn-by-turn navigation, stolen vehicle assistance, automatic crash notification, and—new for 2017—the Teen Driver mode that allows owners to set driving parameters for valets and teens.