The Honda Civic has long been a standout model in the compact car segment thanks to its affordable price tag, respectable fuel economy, and fun-to-drive nature. Honda improved upon all of those categories with its tenth-generation Civic which made its debut last year. Offering two engine options along with two available transmissions, the new Honda Civic coupe offers drivers the chance to customize the car to their specific style and taste. Carrying a starting MSRP of $19,150, the 2017 Honda Civic competes with compact rivals like the Toyota Corolla, Chevy Cruze, and Ford Focus. 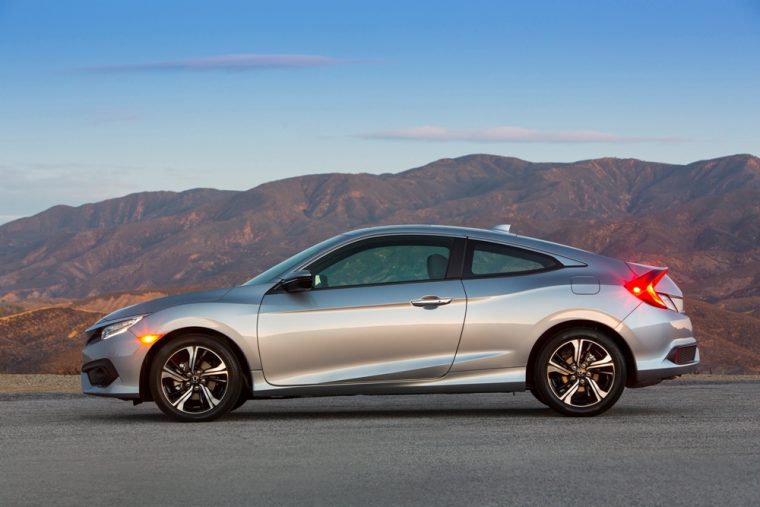 Having just undergone an extensive redesign one year ago, changes to the 2017 Honda Civic were less extreme. For starters, consumers can now get a manual transmission to go along with the turbo engine. In addition, Honda is offering a hatchback version of the Civic this year and has plans to launch Si and Civic Type R models later in the year. 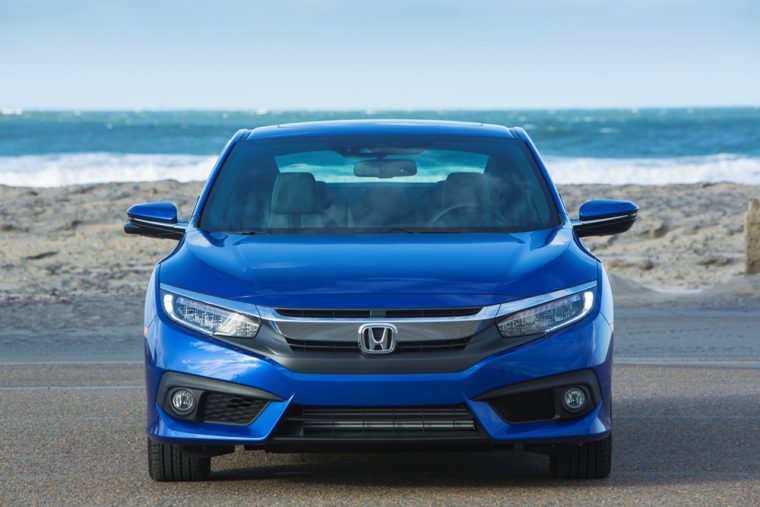 The 2017 Honda Civic coupe boasts a sleek and modern design that’s highlighted by its sloped roofline which gives it an even sportier appearance to go along with its available turbo motor. Every new Civic coupe comes standard with LED daytime running lights, 16-inch alloy wheels, and LED taillights. Furthermore, those consumers in need of more even style should consider the range-topping Touring trim since it comes with added features like chrome door handles and LED headlights. Exterior color options for the ‘17 Honda Civic Coupe include Aegean Blue Metallic, Rallye Red, and Taffeta White. 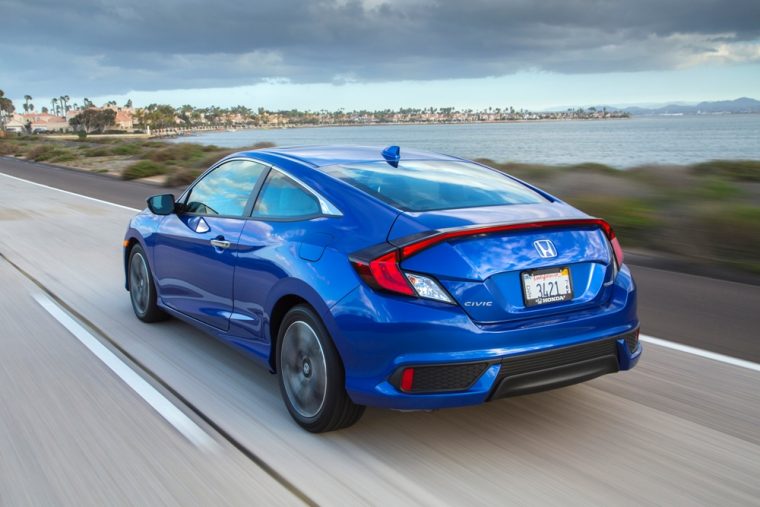 The 2017 Honda Civic Coupe comes standard with a 2.0-liter four-cylinder engine rated at 158 horsepower and 138 lb-ft of torque. That engine can be paired with the buyer’s choice of either a six-speed manual gearbox or Continuously Variable Transmission (CVT). Furthermore, starting with the EX-T model, buyers can upgrade to a 1.5-liter turbocharged four-cylinder engine rated at 174 horsepower and 162 lb-ft of torque. Just like with the naturally-aspirated engine, the turbo-four can be had with either a manual or CVT that sends power to the front wheels. In fact, when the Civic coupe is equipped with the optional turbo engine, it’s capable of accelerating from 0 to 60 mph in less than seven seconds. 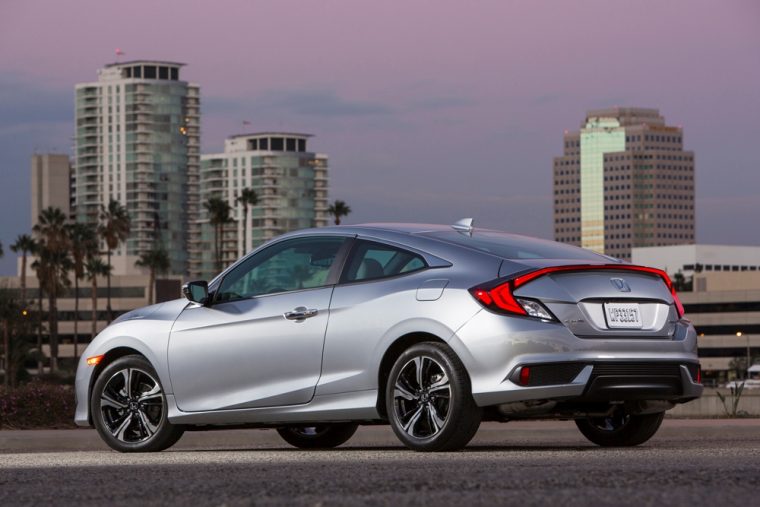 For a car that offers such an affordable price tag and spirited performance, one might think that fuel economy could be a potential drawback, but Honda made sure this wasn’t the case as the 2017 Honda Civic coupe yields an EPA-estimated 28 mpg in the city and 39 mpg on the highway when the car is equipped with the standard 2.0-liter engine and six-speed manual transmission. Moreover, when the available CVT is paired with that motor, fuel economy rises to 30 mpg in the city. Each new Civic coupe comes with a 12.4 gallon fuel tank. 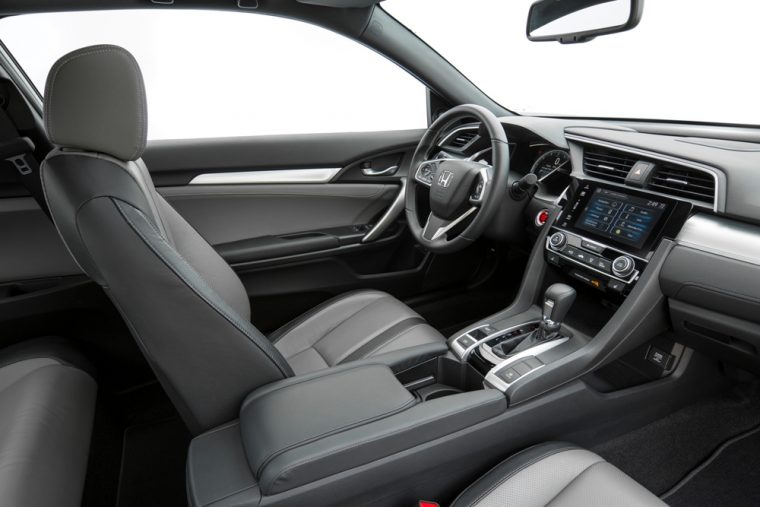 The interior of the new Honda Civic is said to be one of the most spacious, comfortable, and tech-savvy in the compact car segment. Standard equipment includes a rearview camera, automatic climate control, and a four-speaker audio system, but consumers with enough cash to upgrade to higher-level models will get even more entertaining features inside their Civics. For example, heated front seats and dual-zone climate control begin to come standard with the EX-T trim, while the EX-L model provides creature comforts such a leather-wrapped steering wheel and leather-trimmed seats. In addition to those luxurious features, the new Civic is also available with a state-of-the-art infotainment system that provides a 7-inch touchcreen, navigation technology, and Apple CarPlay compatibility. 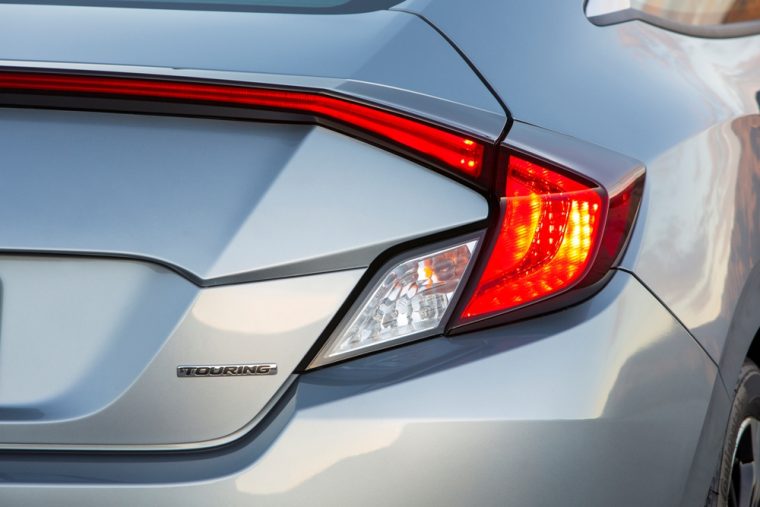