The 2017 Mercedes-Benz SLC is a two-door roadster with a retractable hardtop. This model is the replacement for the outgoing Mercedes-Benz SLK which first launched 20 years ago. The new Mercedes-Benz SLC carries a starting MSRP of $47,950. In addition, the SLC features notable exterior design changes, as well as a new engine option. Key competitors for the new SLC roadster include the 2017 Porsche 718 Boxster, 2016 BMW Z4, and 2016 Mazda MX-5 Miata. 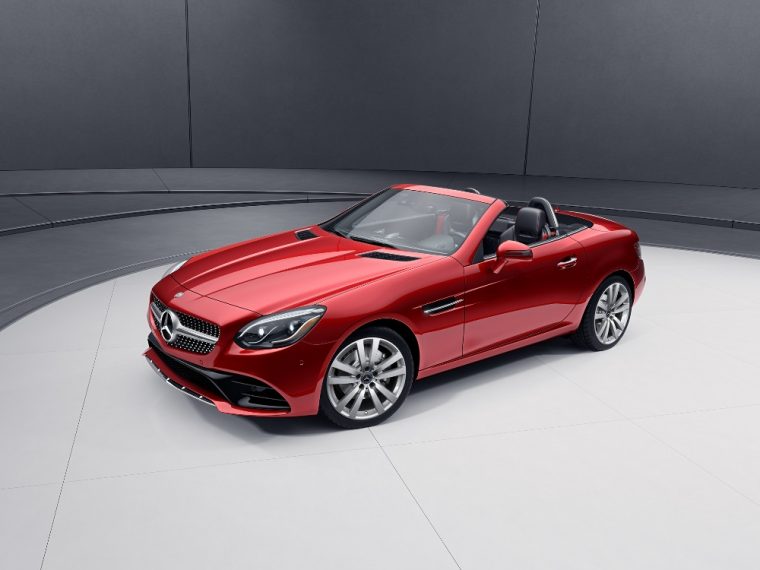 Besides dropping the SLK nameplate, the new Mercedes-Benz SLC comes with a rounder front fascia, twin projector beam halogen headlights, and LED taillamps. Also, there will only be two SLC models offered in the United States, which is down from the three trim levels available with last year’s SLK. As a result of this reduction, the SLC will not offer the 415-horsepower V8 engine. Instead, the SLC will provide a 362-horsepower twin-turbocharged V6 as its highest performing motor. The 2017 Mercedes-Benz SLC is offered in two trims: the SLC300 Roadster and AMG SLC 43. 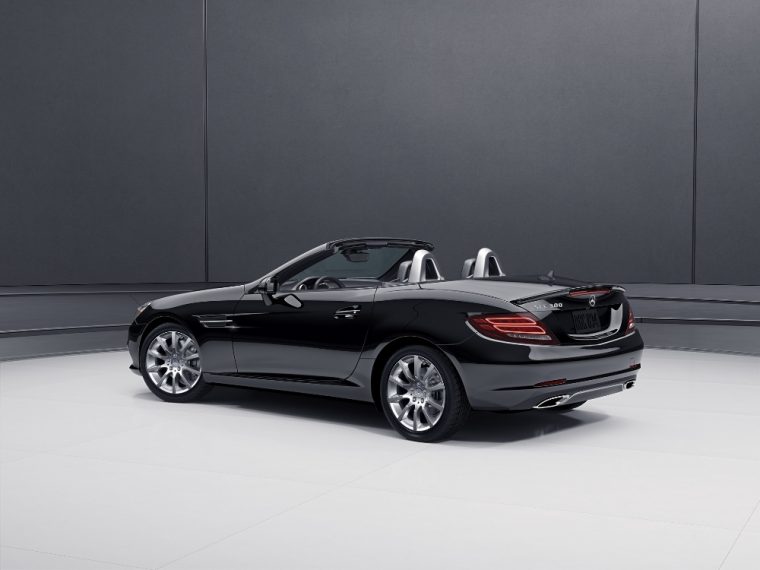 Both the front and rear fascias have been updated for the Mercedes-Benz SLC roadster in order to provide a bolder and more muscular appearance. Notable exterior features include the eye-catching Mercedes diamond grille, as well as 17-inch 10-spoke alloy wheels which are standard, but larger 18-wheels can be found on the AMG variant. The Mercedes-AMG SLC 43 also features a quad exhaust system and is available with an optional Night package, which adds Gloss Black trim to the sleek roadster.

Exterior available on the 2017 Mercedes-Benz SLC300

Exterior available on the 2017 Mercedes-AMG SLC 43 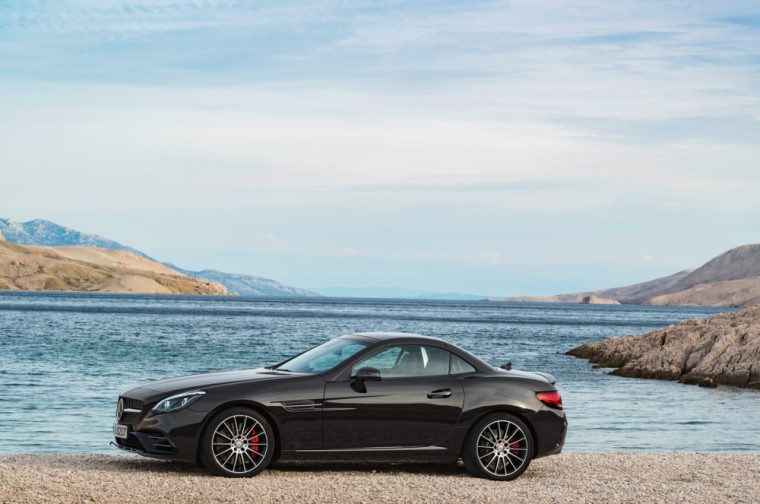 The 2017 Mercedes-Benz SLC300 comes standard with a 2.0-liter turbocharged four-cylinder engine rated at 241 horsepower and 273-lb-ft of torque. This is the same motor found on last year’s SLK300. Mercedes estimates the rear-wheel drive SLC300 will be able to accelerate from 0 to 60 mph in just 5.8 seconds. As previously mentioned, the naturally-aspirated V8 engine found in last year’s SLK55 AMG is no longer offered, but the new Mercedes-AMG SLC 43 still packs plenty of power with its twin-turbocharged V6 motor. This new engine is good for 362 horsepower and 384 lb-ft of torque. Both new SLC models come with a nine-speed automatic transmission. 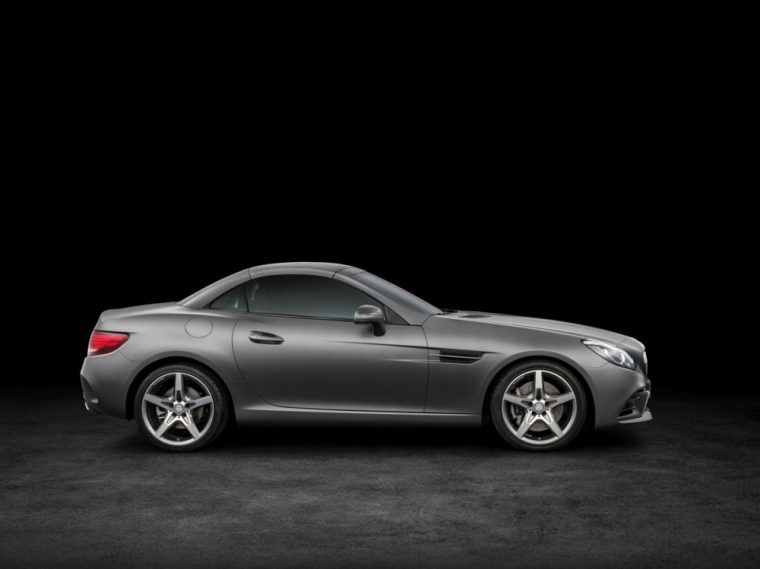 Official fuel economy data for the Mercedes-Benz SLC has yet to be released, but last year’s SLK300 with the same turbocharged four-cylinder engine was able to yield 25 mpg in the city and 32 mpg on the highway. In addition, the ‘17 Mercedes-Benz SLC comes standard with a 15.9 gallon fuel tank. 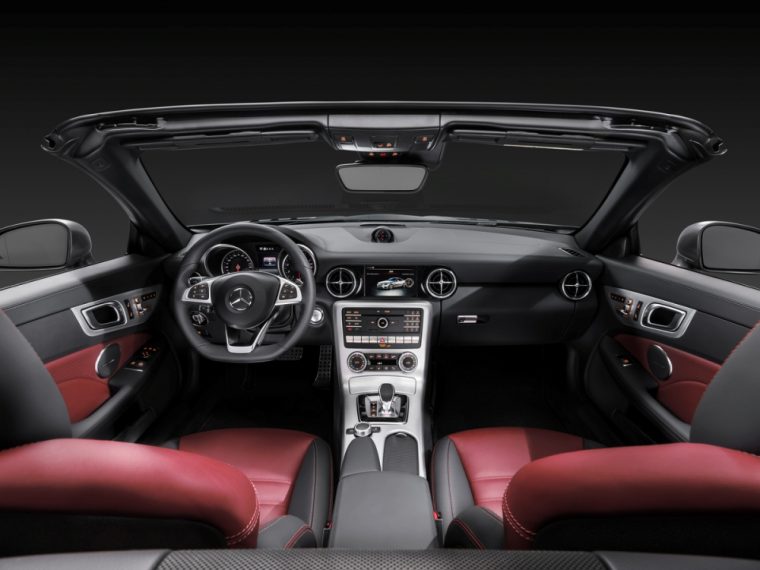 The cockpit of the Mercedes-Benz SLC is quite similar to that of the SLK, but Mercedes did add a new multifunction 3-spoke sport steering wheel that features hand-stitched Nappa leather around the rim and a flat-bottom design. Aluminum trim also highlights the cabin and the high-resolution display screen has grown from 5.8 inches to 7 inches, which should make it easier for the driver to reads maps via the Comand infotainment system with hard-disc navigation. Furthermore, the retractable hardtop roof can open in less than 20 seconds and can also be lowered or raised at speeds of up to 25 mph.

Interior available on the 2017 Mercedes-Benz SLC300

Interior available on the 2017 Mercedes-AMG SLC 43 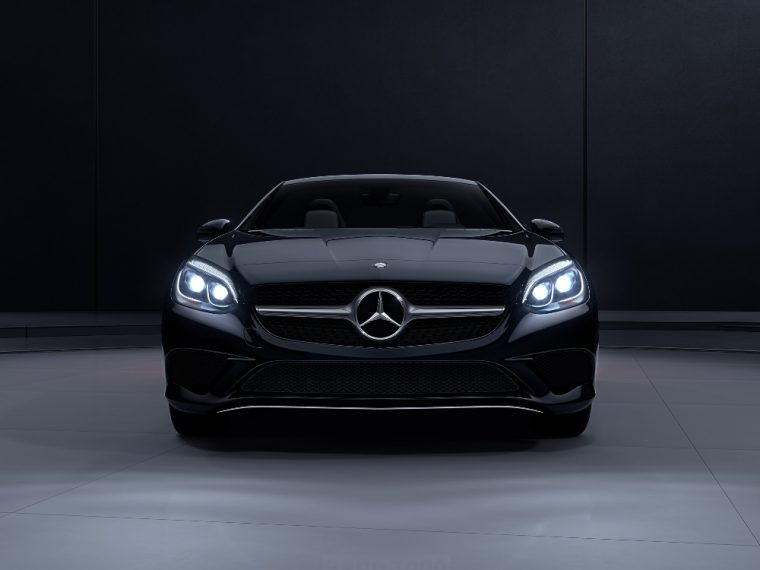 Every Mercedes-Benz SLC comes standard with a rearview camera, LED daytime running lamps, and LED taillamps. Also standard is Mercedes’ Attention Assist technology, which monitors up to 70 factors of driving behavior and can provide visual and audible warning signals to the driver if it detects the driving is exhibiting drowsy driving characteristics. The 2017 Mercedes-Benz SLC has not been crash tested by either the National Highway Traffic Safety Administration (NHTSA) or the Insurance Institute for Highway Safety (IIHS).