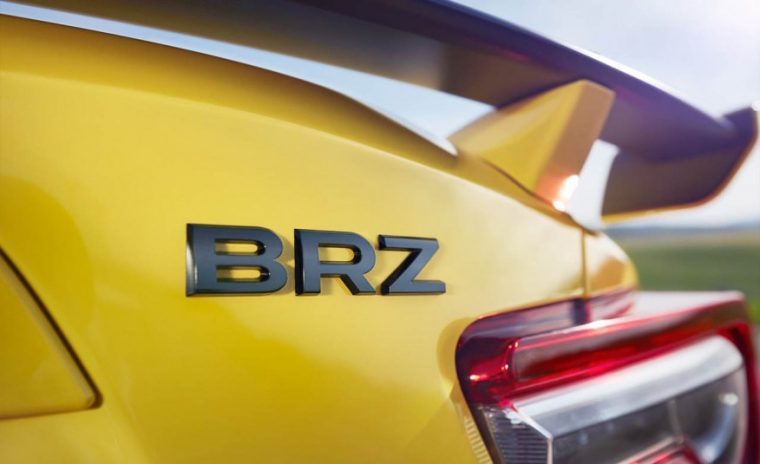 So if you’re fortunate enough to get your hands on one of the just 500 BRZ Series.Yellow models, what can you expect from it? For starters, it gets a bright yellow exterior, but I bet you saw that one coming. That striking yellow is paired well with black all over—17-inch black aluminum alloy wheels, black badging, and black foldable exterior mirrors. The exterior also benefits from upgrades to the bumper, which appears wider and is positioned lower for improved aerodynamics, stability, and control on the road. Like all BRZ models, the special edition BRZ gets a pedestal-style aluminum rear spoiler in matching body color (so yellow, in case that still hasn’t been made evident) and black finish. This new spoiler benefits the BRZ’s downforce for even more improvements to stability and control.

Let’s talk about the BRZ Series.Yellow’s lighting for a second, because Subaru has pulled out all the stops this year. The “kono-ji” style LED headlights with Daytime Running Lights feature integration with the turn signal and position light, to refine the front fascia. The special edition model also gets LED fog lights for better visibility at night.

Up Next: A look inside the special edition BRZ… 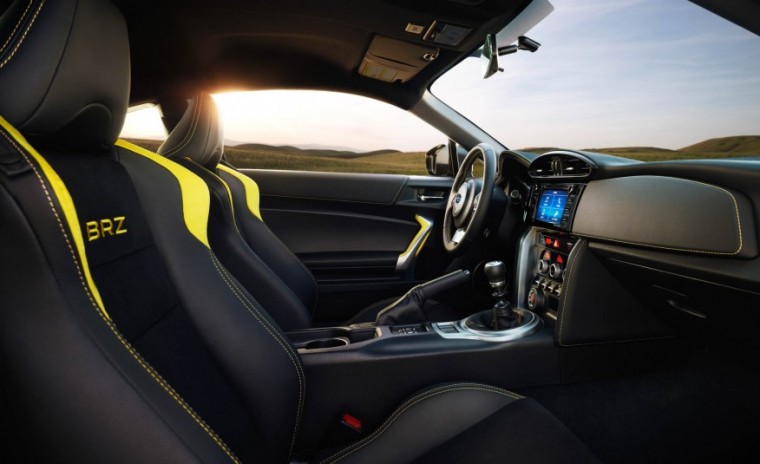 Inside the 2017 Subaru BRZ Series.Yellow

Step inside the 2017 BRZ Series.Yellow for even more upgrades. Standard on the special edition model is Subaru’s 4.2-inch LCD multifunction display, where you can get info on braking force, lateral Gs, steering angle, accelerator pedal position, battery voltage, oil and water temperature, and a stop watch to record lap times.

Wrap your fingers around the BRZ Series.Yellow’s leather-wrapped steering wheel and enjoy what Subaru calls the “firmer, sportier feel.” This updated steering wheel includes new audio controls, as well as switches for the multifunction display. The interior also features dual-zone automatic climate control, front door courtesy lights, and dual illuminated visor vanity mirrors. You’ll even be able to climb inside and start your car without your key in hand or ignition using Subaru’s Keyless Access with Push-Button Start.

The interior is also marked by black leather and Alcantara upholstery, featuring yellow (what else?) stitching on the seats, doors, dash panels, knee pads, shifter boot, and steering wheel. The BRZ logo makes its way onto the front seatbacks, yellow and embroidered. The BRZ also comes with carpeted floor mats with the same yellow stitching and embroidered logo.

Up Next: Take a look under the hood of the 2017 BRZ Series.Yellow… 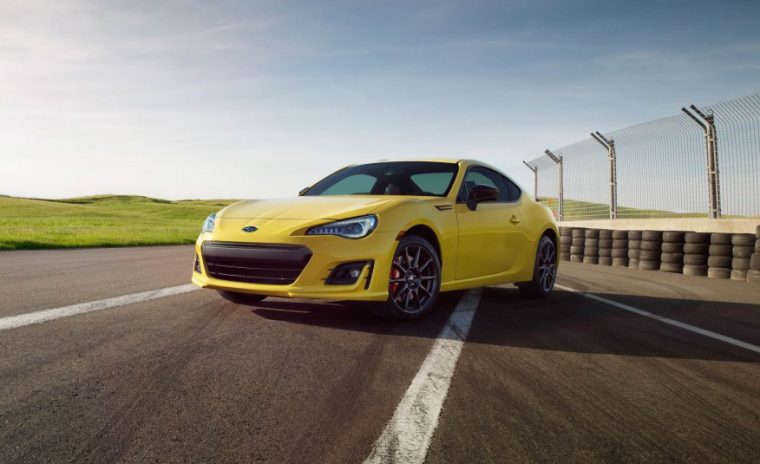 The 2017 BRZ benefits from updated coil springs, as well as a larger rear stabilizer bar, for increased performance. The Series.Yellow model specifically receives SACHS Performance shock absorbers. The special edition model also gets the Performance Package for increased control. Stopping is enhanced with Brembo four-piston calipers and rotors on the front and dual-piston calipers, as well as rotors on the rear.

The 2017 Subaru BRZ Series.Yellow is powered by a 2.0-liter BOXER engine, mated to a six-speed manual gearbox. The model is rated at 205 horsepower and 156 lb-ft of torque.

The 2017 Subaru BRZ Series.Yellow model debuted on June 12th at the Wicked Big Meet in Stafford Springs, Connecticut. It will arrive at dealerships later this year.